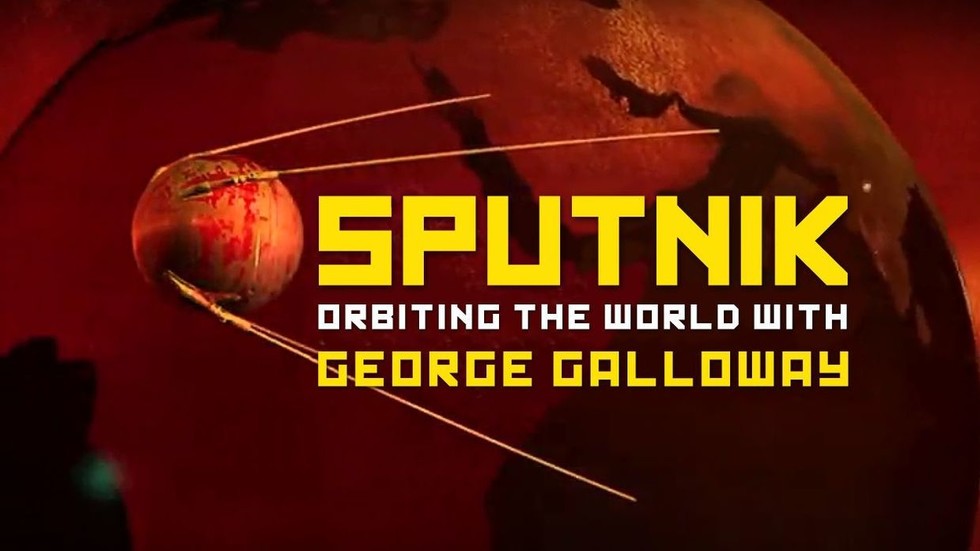 Sputnik Orbiting the World, looking behind the stories which made the news, as well as unearthing the ones that didn’t. Expect debate and discussion between George Galloway and authoritative, influential, but most importantly, informed guests. Topics may differ from politics to social concerns, but Sputnik will remain true to its aim – bringing a new perspective, a different view.

According to the laws of aerodynamics, the bumblebee cannot fly. Its wings are too flimsy, its body too heavy. But fly it does. According to the laws of Russia’s enemies, sanctions on an unprecedented scale were to wreck the ruble and crash the Russian economy, but the opposite has happened. The ruble has recovered its early losses, and it is the European and North American economies which are looking distinctly rocky. Legendary geopolitical analyst Pepe Escobar predicted exactly this; we asked him how it happened and what the future holds.

According to a royal house which helped pay for it, US$2 trillion was burned trying to destroy the Syrian Arab Republic and replace it with the alphabet soup of Islamist fanaticism. It was another American plan which went wrong. When Joe Biden was walked back from declaring regime change in Moscow, Secretary Blinken said the US had no intention of such a thing, either in Russia “or anywhere.” It was reported that this made the horses laugh. We asked Steven Sahiounie, the Syrian-based chief editor of Mideast Discourse News, to discuss Syria, Russia, Ukraine, US false flags, and fanatics.

When US President Joe Biden described Russia as having its ‘back to the wall’ in Ukraine and possibly contemplating an attack using Weapons of Mass Destruction, nobody asked how Russia has its back to the wall. Still less how a WMD incident could possibly get its back away from the wall. That would be a far too rational question to ask. Given the history of American false flags from the Gulf of Tonkin through to the War on Terror, the rational assumption was the Goebellian one – accuse your enemy of that which you intend to do. The inference has clearly been made from Washington and NATO that such a WMD event would be a ‘red line’. The distinguished academic and co-founder of Spinwatch, Professor David Miller, who helped expose false-flag attacks in Syria, examines the latest developments.

This week, in a cruel yet pathetic series of spiteful decisions, the British authorities sought to spoil the wedding of journalist and publisher Julian Assange and his new bride Stella, the mother of the couple’s two young children. It was degrading, diminishing. Not for the world’s most famous prisoner, but for the British. One man who has carried the banner of press freedom and liberty high in the United States is a friend of the couple, American artist and host of Assange Countdown to Freedom, Randy Credico. He joins us to discuss the plight of the WikiLeaks publisher.

NATO's infowar and the history of the Ukrainian conflict (E427)

NATO is not just traditional weapons of war but a vast regiment of journalists whose salary and status is absolutely determined by the gusto with which they prosecute NATO's war. Over the Ukraine there isn't even a tiny chink in the armor, it is an ironclad consensus. Using their control over Big Tech, they are literally book-burning in a frenzy of cancellation and deplatforming. NATO has all the big guns. We've talked to Consortium News' distinguished Editor-in-Chief, Joe Lauria, on this worrying development.

The conflict in Ukraine didn't just begin last month or even last year, but eight long and bloody years ago, and 14,000 Ukrainian citizens were slaughtered there. Not by Russia but by other Ukrainians, by the Ukrainian armed forces and their vanguard in the Neo-Nazi battalion. But not a lot of people know that, and those that do are determined to conceal it. We explore the history of this conflict with Security Analyst Mark Sleboda.

Some 500 years of Western domination is rapidly coming to a close, accelerated by the great decoupling underway due to events in Ukraine. The West should remember that it constitutes just 10% of the population of the world, though history has taught that 10% to believe they are the international community. In truth, the West is the periphery of the new Eurasia. Joining us now is a leading theorist of these tectonic changes, Professor Glenn Diesen of the University of South-Eastern Norway.

There’s no longer a pretense in European countries, let alone North America, that this is not a NATO-Russian confrontation in Ukraine. European countries in particular are stuffing mercenaries and high-tech weapons into a non-NATO country resisting the very country that NATO was set up to confront. Full-scale economic warfare has been unleashed against Russia, whose minimal demands in the words of Sergey Lavrov have been rejected. We’ve asked a veteran war journalist, Elijah Magnier, from the heart of the European Union, to explain more about the situation.

While Ireland has been an independent country for a very long time, old ties between Britain and the Republic have remained tight. Millions of Irish people live in Britain, can vote in British elections, and travel freely back and forth without let or hindrance. But the strains are now starting to show. The Irish government hybrid of once fierce enemies Fine Gael and Fianna Fail is in clear trouble, and beset by all kinds of scandals. We asked Chay Bowes, a campaigner and entrepreneur based in Dublin, to tell us more.

Glasgow’s Upper Clyde Shipbuilders’ “work-in” back in 1971-2 was the opposite of a strike. The British government had ordered the men to down tools, but the workers insisted they work on to save their jobs in an industry that was in slow decline. The movement’s leaders – Jimmy Reid, Jimmy Airlie, Sammy Barr, and Sammy Gilmour – led 8,500 workers in a protest about under-investment in Scotland’s shipyards and, in doing so, captured the country’s imagination. Now, to mark the work-in’s 50th anniversary, a new musical, ‘Yes! Yes! UCS’, telling their story, is about to go on tour across the UK. We invited playwright Neil Gore and actor/musician Janie Thomson aboard Sputnik to fill us in.

‘What is China?’ seems to be an important question to ask as we are dragging in the slipstream of an increasingly belligerent American policy toward its biggest rival. It only seems like yesterday that Prime Minister David Cameron and Chancellor George Osborne helped in the beginning of a new golden age in Anglo-China relations. How quickly things soured. Paolo Urio, Professor Emeritus at the University of Geneva, has been a China watcher for several decades so who better to help us answer the question.

HRH Queen Diambi of the Bakwa Luntu People of Kasaï in the Democratic Republic of Congo is a philanthropist, businesswoman, and environmentalist as well as a passionate advocate for Africa and its diaspora. She recently toured the UK addressing the Oxford Union and the plastic-free ocean summit in Devon. She joined Sputnik to tell us more about her title, work, and activism.