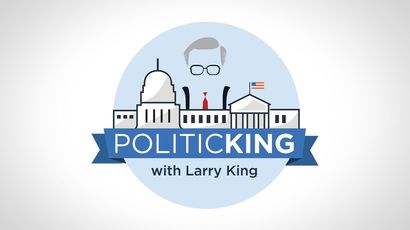 Legendary host Larry King and OraTV bring "Politicking", their new political show, to RT America viewers. World leaders and policy makers will be regular guests of the interviewer whose deep knowledge, ability to moderate differing points of view, and unique sense of humor have made him an icon.

Pollster Frank Luntz tells Larry that the political polling industry is "done" if Donald Trump defies the experts and ekes out another win. Plus, what still-undecided voters are telling him about each candidate and why they're leaning for one over the other.

Commentator Bill Press tells Larry why he thinks voters will know on November 3rd who won the presidential election. Plus, 'Black-ish' star Jenifer Lewis on why she's "ridin' with Biden," and singing out for social and political change.

Larry talks with former Senate Majority Leader Bill Frist (R-TN), who is also a cardiologist, about Donald Trump's Covid-19 diagnosis and treatment. Plus, why he thinks the president is sending the wrong message to Americans about the virus.

Larry talks with Alexey Likhachev, CEO of Rosatom State Atomic Energy Corp., about the decrease in US-Russia cooperation in the nuclear energy sector, the impact of emerging green energy on nuclear power development and the possibilities of mining in space.

What impact will the Trump tax story have on his re-election bid?

What impact will the bombshell report on Donald Trump's tax returns have on the presidential election? Larry talks with Mark Green, author of "Wrecking America," and former Congressman Jim Kolbe (R-AZ).