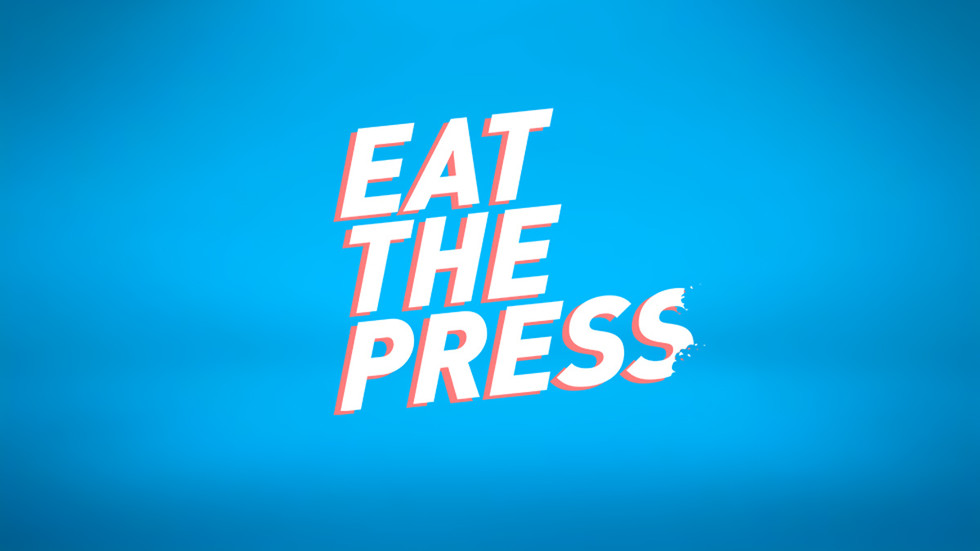 ‘Eat the Press’ is a take-no-prisoners media critique bloodbath hosted by Steve Malzberg. Watch him expose the smugness, hypocrisy, bias and lies that saturate mainstream news and reveal its so-called journalism for what it really is.

“The View’s” Whoopi Goldberg and Joy Behar claim that Trump would have made things very easy for Russia, had they decided to move on to Ukraine while he was in the White House. Easier than Biden has made it? We’ll take a closer look. Walk-Away Campaign Founder Brandon Straka was at the Capitol on January 6th, and he was recently sentenced to probation. But a lot has happened in between, and he will be here to tell us about it. The Supreme Court will hear a case that could spell the end for affirmative action and the media can't take it. We'll explain it all. MSNBC contributor says ‘America hates black people.' What did he base his opinion on? We’ll show you.

Eminem took a knee during the Super Bowl's hip hop halftime show last Sunday, but it was some of the others on the stage that should have raised red flags for the NFL. We’ll show you who and why. It's been a year since the passing of talk radio legend Rush Limbaugh, we'll talk to James Golden, AKA Bo Snerdley, the man who was an integral part of Rush's show for 30 years... A trans collegiate swimmer has become the focal point of next month's NCAA tournament. Steve Malzberg will take a closer look. Plus, ABC News has a history of sucking up to notorious dictators. We’ll show you.

Stacey Abrams is running for Governor of Georgia again, but going maskless with children inside a school will not help that effort. We'll hear a reaction from some in the media to Abram's big blunder.

Republicans are questioning why the DOJ went to bat for a BLM arsonist, but the media has remained mostly silent on it all. Plus, Hillary will headline Inaugural Forbes 30/50 Summit in Abu Dhabi next month, and next week she'll be speaking at the New York Democrat Convention… Is this the beginning of her third presidential campaign? Will Biden appoint Kamala Harris to the Supreme Court, then pick Hilary as his V.P., and leave office before 2024, making her the incumbent? The panel, Former NY Congresswoman Dr. Nan Hayworth and the Host of “Counterculture with Danielle D’Souza Gill” on Epoch Times TV will join Steve to discuss. More police officers were killed last year than in any year since 1995.

Heather Mac Donald, author of The War on Cops will be here to explain what's going on.

Tucker Carlson comes up with some advice for CNN on who should replace Jeff Zucker… You won't want to miss this, trust me!

Whoopie Goldberg steps in it big time while exposing her ignorance about the Holocaust. She is currently serving a suspension for her remarks following an apology, we'll bring you all the details. The head of CNN is out, Jeff Zucker admits to hiding a sexual relationship with a colleague... We have all the details. Plus, Bob Costas rips the IOC for choosing China for the Olympic games, which are now underway... And he has a lot more to say about it.

Supreme Court Justice Steven Brayer is set to retire at the end of this term, and the media celebrates the opportunity it presents for Joe Biden, who has promised to appoint the court's first black woman. Is it affirmative action? Legal and media analyst Lionel of Lionel Media will be here to weigh in. Christians are under attack in many countries around the world and here at home, we'll discuss it all, with Hedieh Mirahmadi, who converted from Islam to Christianity. Plus, Little Steven Van Zandt makes some INSANE remarks, we'll have them for you in the Dessert segment.

Joe Biden held his first press conference in 10 months, and it's what he said next about Russia and Ukraine that had people's heads spinning. We'll let you hear it and the media's reaction to it. Plus, Biden wants media outlets to stop what he calls misinformation on COVID. Dr. Naomi Wolf will be here to weigh in. She was the White House Correspondent for Newsmax, taken off the air and then let go, and she has a new gig... Emerald Robinson joins Steve Malzberg to talk about her confrontation with Jen Psaki and much more. It happened again… We’ll show you yet another Kamala sit-down disaster.