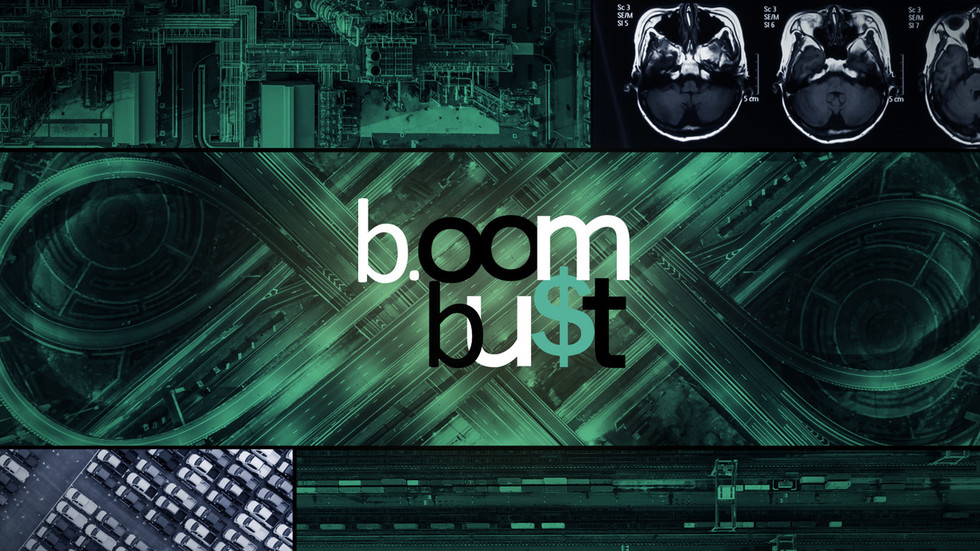 The boom/bust cycle is as old as Western banking itself. Our hosts break through the mainstream headlines to find the stories that matter, and help you navigate the booms and the busts.

Despite being one of the few nations to see economic growth in 2020, China has seen its 2021 Q3 GDP growth dip amid dual crises. Boom Bust’s Christy Ai offers her analysis of the slump, explaining how the energy crunch and supply-chain issues are driving volatility. And Facebook is speaking out in defense of its AI algorithm amid rising criticism. Boom Bust’s Ben Swann fills us in on the details. Plus, ECB head Christine Lagarde has addressed the supply-chain woes that continue to hamper the European Union. Hilary Fordwich of the British-American Business Association joins us in the studio to break down the complications and the role globalization has played in the slowing recovery.

The Boeing 737 MAX saga has seen yet another major development as the Department of Justice has indicted a former pilot involved in the jet’s production. RT’s John Huddy brings us up to speed on the latest turn in the investigation. And bitcoin’s price has rallied past the $60,000 mark on optimism of a possible ETF for the world’s foremost cryptocurrency. Boom Bust’s Christy Ai lends her analysis of the surge and how realistic the ETF possibility is. And the only Western social media operating in China has officially withdrawn from the world’s most-populous nation. We bring you the full story behind LinkedIn’s departure from the market.

The US has now officially become the world leader in bitcoin mining following China’s decision to ban the practice. Boom Bust’s Christy Ai and Jeffrey Tucker of the Brownstone Institute offer their insights on the development. And supply chain issues continue to grip the global economy as the holiday season approaches. David McAlvany of the McAlvany Financial Group lends his analysis of the bottleneck shortage. And US workers are taking to the picket line. Boom Bust host Brent Jabbour joins us from Las Vegas to discuss what’s driving the spike in strikes amid the ongoing labor shortage.

The US saw a record number of workers quit their jobs in August in the midst of an ongoing labor shortage. Professor Richard Wolff joins the program to discuss the figures and the factors driving the surge. And William Shatner has officially become the oldest person to reach space after Blue Origin’s successful Wednesday launch. Plus, China’s burdened property market has been upgraded by Morgan Stanley, despite the ongoing woes of the Evergrande Group. Boom Bust’s Christy Ai and Dean John Quelch of the Miami Herbert Business School bring us up to speed on the developments in the world’s second-largest economy.

Bitcoin’s price is surging amid rising optimism. Boom Bust’s Christy Ai analyzes the spike and the factors pushing prices higher. Plus, the IMF has cut its outlook for global growth as supply chain issues and Covid-19 continue to grip the world. Octavio Marenzi of Opimas LLC weighs in on the forecast and what he anticipates moving forward. Then we take you to the travel sector, where Southwest Airlines saw a huge wave of cancelations over the weekend. RT correspondent Sayeh Tavangar brings us the latest. And Aaron Pagel of DePaul University joins us to discuss the prospect of William Shatner becoming the oldest person to travel to space.

Energy prices continue to skyrocket as a global shortage slams the world and winter approaches in the Northern Hemisphere. On this episode of Boom Bust, we bring you a full view of the state of the crisis and how nations are planning to tackle the issue. Plus, following a disastrous week, Facebook is now claiming to open up its algorithm to federal scrutiny. Boom Bust’s Ben Swann brings us up to speed on Facebook’s efforts to course correct. And after years of discussion, the OECD has finally agreed on a new framework for a global minimum corporate tax. Hilary Fordwich of the British-American Business Association joins the program to discuss the new development for the international community.