A heavy dust storm is gripping the Red Planet, making visibility incredibly poor even in the middle of the day. But it didn’t stop NASA’s Curiosity rover taking an amazing selfie on the surface of Mars.

Curiosity’s self-portrait has been snapped from the rover’s current location in the Gale Crater, a valley 96 miles (154km) in width. The incredible image was made through the Mars Hand Lens Imager, installed on the end of Curiosity's robotic arm – effectively acting as a huge selfie stick.

The camera had to take a series of photos because it’s unable to capture the entire rover in one shot. Kevin M. Gill, a NASA software engineer who processes Curiosity’s photos as a hobby, merged them all into a single, full frame panorama and uploaded it to image hosting service Flickr.

The panoramic selfie shows the rover's surroundings, including a rock with a drill hole in it and a small pile of dark orange dust. 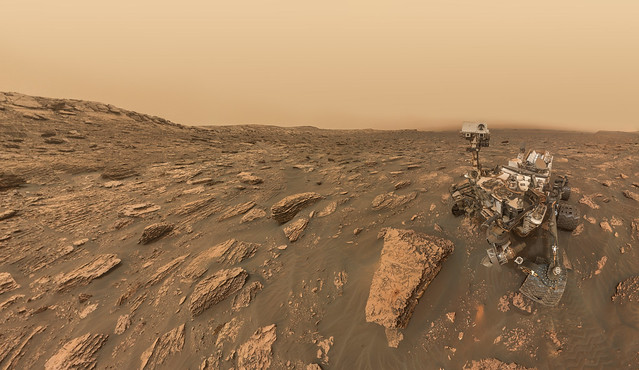 Curiosity has been exploring Mars since touching down in August 2012, with the goal of finding out if the Red Planet was ever able to support extraterrestrial life. Since then, it has sent back a trove of images and soil samples, offering evidence that living microbes could have existed on Mars.