Americans are sharply divided about almost every aspect of the coronavirus pandemic, except for overwhelming mistrust of information coming from China, a new poll shows, aligning with the mainstream media coverage of the outbreak.

One phrase keeps coming up repeatedly in the results of a new American Trends poll, released Thursday by the Pew Research Center: “significant partisan differences.” Question after question shows a wide gap between Democrats and Republicans on almost every topic.

For example, only 28 percent of Republicans believe the US can learn “a great deal” from other countries about how to handle the virus, compared to 60 percent of Democrats. 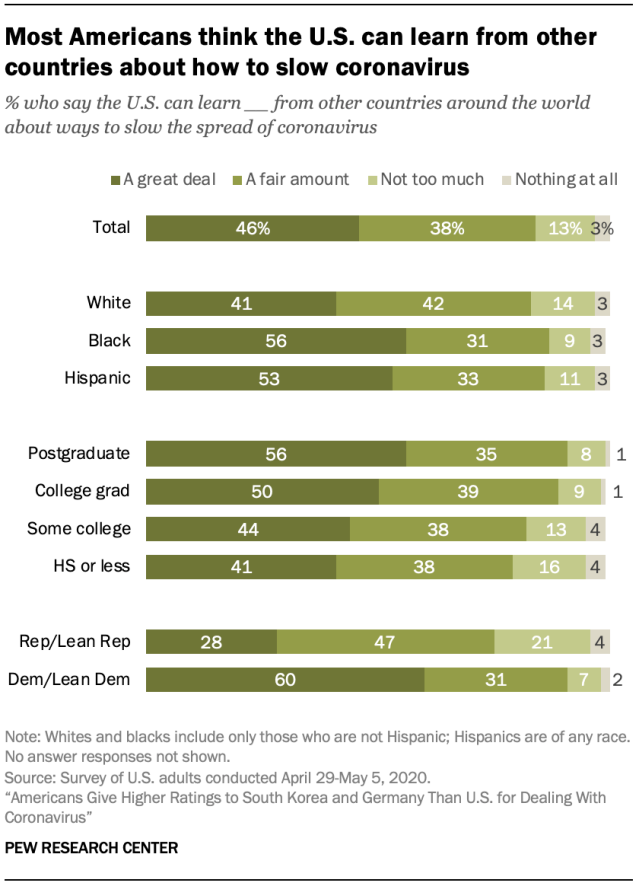 The extremes of each party are also very far apart. While liberal Democrats overwhelmingly (81 percent) believe the US has done an only “fair or poor” job of dealing with the pandemic, while only 22 percent of conservative Republicans think likewise.

Also on rt.com The more you know? Over a third of Americans apprehensive about Covid-19 vaccine, citing rushed development & trust issues

When it comes to the World Health Organization (WHO) there is a significant partisan divide again: 62 percent of Democrats think it has done a good job and 80 percent trust its information, compared to only 28 percent and 36 percent, respectively, on the Republican side.

Even the opinion of how China – where the virus has originated – handled the outbreak is a partisan issue. While the disapproval is near universal, it runs 53-55 percent among the Democrats and  69-80 percent among the Republicans.

A whopping 84 percent overall distrust information about the outbreak coming from Beijing, however – which is hardly surprising, given that this is one thing the US mainstream media have agreed on for the past two months. 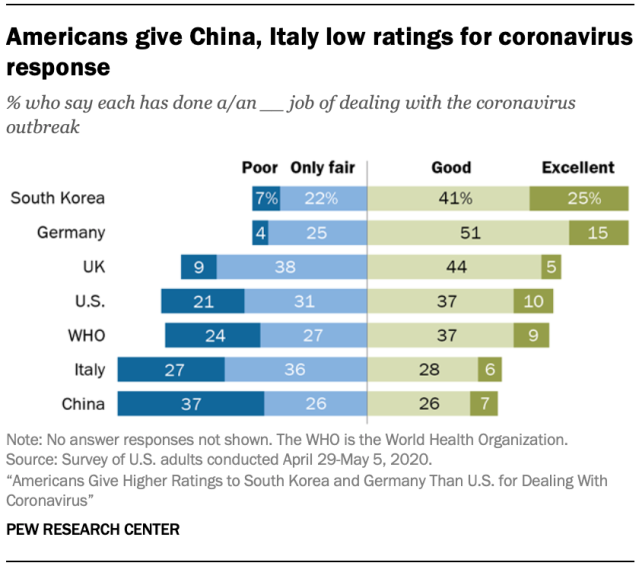 Attitudes towards other countries’ handling of the pandemic also appear to be driven by the way they are covered in mainstream media rather than actual facts and figures. This explains why Italy is far below the UK, though the latter has had more deaths so far – or why China ranks last on the list, despite having almost half the death toll of Germany.

The survey was conducted between April 29 and May 5, among 10,957 US adults on Pew’s American Trends Panel.

The price of defeat: The US fled Afghanistan exactly a year ago, but the real consequences are yet to come FEATURE
The last Tsar: How Russia commemorates the brutal communist murder of Emperor Nikolai II's family FEATURE
How the ambitions of a small country's US-backed leader launched the current confrontation between Russia and the West FEATURE
Podcasts
All podcasts
Crosstalk, HOME EDITION: Tide is turning
0:00
26:21
CrossTalk on Taiwan: Reckless policy
0:00
24:2