Senator Rand Paul of Kentucky is one of several Republicans who have vowed to vote against the GOP’s bill to repeal-and-replace Obamacare. Instead, he has introduced legislation that would simply repeal the Affordable Care Act.

House Republicans published their Obamacare replacement legislation, entitled the American Health Care Act, on Monday. Their 123-page proposal, which is supported by the Trump administration, would give power and decision-making back to the states, restore the free market to health insurance, and provide $10 billion a year from Congress to the states to subsidize Medicaid and ensure continuing coverage, the bill’s architects said. Tax credits toward health care would be available immediately, grow with age, expand with family, and transfer with employment.

The House GOP proposal was met with a tepid reception in the upper chamber, with a dozen Republican senators saying they were uncertain whether they would vote for it, according to The Hill’s latest whip count. Paul is the only one to definitively say he will vote against it.

“The Republican Party is unified on Obamacare repeal,” Paul said in a statement. “We can honor our promise right away by passing the same language we acted on in the last Congress. Then, we can have a separate vote on replacement legislation that will deliver lower costs, better care, and greater access to the American people."

Paul’s bill, along with companion legislation that Representative Jim Jordan (R-Ohio) filed in the House, would stagger the repeal of portions of Obamacare by axing the tax on medical devices in 2018 and the tax on so-called Cadillac coverage in 2020. That same year, it would also eliminate eligibility for the Medicaid expansion and the higher federal matching rate, The Hill reported. 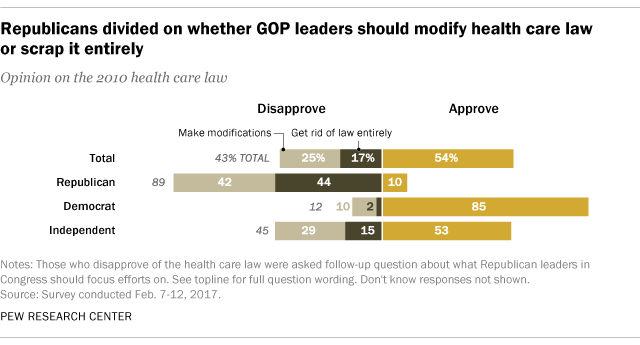 It’s the second bill Paul has filed this year regarding the Affordable Care Act. At the end of January, he introduced a bill to replace Obamacare that was co-sponsored by Sen. Pat Toomey (R-Pennsylvania).

“Conservatives don't want new taxes, new entitlements and an ‘ObamaCare Lite’ bill.  If leadership insists on replacing ObamaCare with ObamaCare-lite, no repeal will pass,” Paul and Rep. Mark Meadows (R-North Carolina) wrote in a Fox News Op-Ed. “Nobody wants ObamaCare repealed more than we do.  We think the only way to repeal ObamaCare is to separate repeal from replace.”

Paul has been the most independent Republican in the Senate since President Donald Trump entered the White House. Sen. Lindsey Graham (R-South Carolina) praised his Kentucky counterpart for his “principled” stance, but noted that Paul’s bill was unlikely to pass without cooperation from Democrats, who are not likely to vote for any sort of repeal, as Paul himself admitted.

“You’re not going to pass a bill without refundable tax credits. You’ve got to have some mechanism to help low-income Americans,” Graham told Politico. “So he’s on the other side of almost all Republicans.”

White House press secretary Sean Spicer rebuked conservative lawmakers for not getting behind the three-pronged plan backed by Trump and GOP Congressional leadership, instead of simply repealing the Affordable Care Act as Paul’s bill seeks to do.

White House press secretary Sean Spicer rebuked conservative lawmakers for not getting behind the three-pronged plan backed by Trump and GOP Congressional leadership, instead of simply repealing the Affordable Care Act as Paul’s bill seeks to do.

If that doesn’t happen, however, Trump’s backup plan would be to allow Obamacare to fail and let the Democrats be the scapegoat, the president told leaders of conservative groups during a meeting in the Oval Office on Thursday morning, CNN reported.

Trump appeared to brush off Paul’s complaints, telling the group: “I love him. He’s a friend. He’s going to end up voting for it.” The comment echoed a Tuesday Trump tweet.

I feel sure that my friend @RandPaul will come along with the new and great health care program because he knows Obamacare is a disaster!

One attendee was astonished that the White House had been blindsided by conservative opposition to the bill. “We telegraphed it for weeks,” the unnamed tea party official told CNN.

More than half of Americans (54 percent) approve of Obamacare, according to a February poll by the Pew Research Center.

We have implemented a new engine for our comment section. We hope the transition goes smoothly for all of you. Unfortunately, the comments made before the change have been lost due to a technical problem. We are working on restoring them, and hoping to see you fill up the comment section with new ones. You should still be able to log in to comment using your social-media profiles, but if you signed up under an RT profile before, you are invited to create a new profile with the new commenting system.

Sorry for the inconvenience, and looking forward to your future comments,