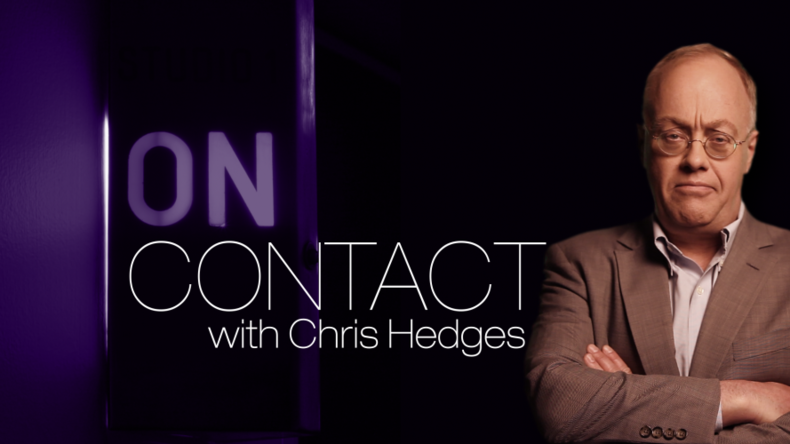 Author and social critic Chris Hedges hosts a weekly interview show called ‘On Contact,’ which will air “dissident voices” currently missing from the mainstream media. Hedges interviews the black sheep of the establishment, leading discussions that can’t be heard anywhere else.

On Contact: Trauma & Transformation in an American Prison, Part 2

In the second of a two-part interview, journalist Hugh Hamilton discusses with Pulitzer Prize-winning journalist and author Chris Hedges the role of race and poverty in mass incarceration, as chronicled in Hedges’ new book, ‘Our Class: Trauma and Transformation in an American Prison’.

The pipeline that fuels our system of mass incarceration runs through the intersection of race and poverty in all too many of our neglected and marginalized urban centers. In his new book, ‘Our Class’, author Chris Hedges describes the impact of this debilitating poverty that pervades many of our cities and towns. He writes: “The social hell of urban America is the great destroyer of dreams. It batters and assaults the children of the poor. It teaches them that their dreams, and finally they themselves, are worthless. They go to bed hungry. They live with fear. They lose their fathers, brothers, and sisters to mass incarceration – and, at times, their mothers.

“This social hell is relentless. It wears them down. It makes them angry and bitter. It drives them to hopelessness and despair. The message sent to them by the dysfunctional schools, the decrepit housing projects, the mercenary financial institutions, gang violence, instability, and ever-present police abuse, is that they are human refuse.”

The US imprisons more of its people than any other country in the world. According to the non-profit Prison Policy Initiative, the American prison-industrial complex currently holds captive nearly 2.3 million people in more than 6,000 prisons, penitentiaries, jails, detention centers, and correctional facilities across the country.

In his newest and positively riveting page-turner, Pulitzer Prize-winning journalist and author Chris Hedges takes us behind the forbidding bars of steel at East Jersey State Prison, into a world where prisoners are people. Together, as students in Hedges’ college-level prison class, they embark on a journey of artistic and personal discovery. Tasked with the challenge of writing a dramatic play of their own, these students deliver eloquent, original, and often painful voices to the heartbreaking grief and suffering that they and their families have endured.

On Contact: The anonymous executioners of the corporate state

Judge Loretta Preska, an adviser to the conservative Federalist Society, to which Chevron is a major donor, sentenced the human rights attorney and Chevron nemesis Stephen Donziger to six months in prison on October 1 for misdemeanor contempt of court after he had spent 787 days under house arrest in New York.

Preska’s caustic outbursts – she said at the sentencing, “It seems that only the proverbial two-by-four between the eyes will instill in him any respect for the law” – capped a judicial farce worthy of the antics of the presiding judges at the major show trials of the Great Purges in the Soviet Union or the Nazi judge Roland Freisler, who once shouted at a defendant “You really are a lousy piece of trash!”

Donziger, a graduate of Harvard Law School, has been fighting polluting American oil companies for nearly three decades on behalf of indigenous communities and peasant farmers in Ecuador. His only “crime” was winning a $9.5 billion judgment in 2011 against Chevron for thousands of plaintiffs. The oil giant had bought Texaco oil company holdings in Ecuador, inheriting a lawsuit alleging it deliberately discharged 16 billion gallons of toxic waste from its oil sites into rivers, groundwater, and farmland. Since the verdict, Chevron has come after him, weaponizing litigation to destroy him economically, professionally, and personally.

The sentencing came a day after Donziger petitioned the court to consider an opinion by the United Nations Human Rights Council that found his house arrest a violation of international human rights law. The UN Human Rights Council said his house arrest counted as detention under international law and it was therefore illegal for Judge Preska to demand an additional six months in jail. Amnesty International also called for Donziger’s immediate release.

Donziger and his lawyers have two weeks to appeal the judge’s order that Donziger be sent immediately to jail. Preska denied Donziger bail, claiming he is a “flight risk.” If the Federal Court of Appeals turns down Donziger’s appeal, he will go to jail for six months. The irony, not lost on Donziger and his lawyers, is that the higher court may overturn Preska’s ruling against him, but by the time that decision is made he will potentially have already spent six months in jail.

On the show, Chris Hedges discusses the Israeli-Palestinian conflict with Professor Ilan Pappe from the University of Exeter.

The Biden administration has turned its back on the Israeli-Palestinian peace process, always more political theater than an honest effort by the United States to broker an equitable agreement between the Palestinians and the Israelis. This means the brutal military occupation in the West Bank and East Jerusalem will continue, the 15-year siege in Gaza, which includes frequent Israeli bombardments that have resulted in the deaths of hundreds of Palestinian noncombatants, will continue, the Palestinian diaspora will not be permitted to return, the Israeli seizure of Palestinian land and bulldozing of Palestinian homes will expand, the US Embassy, moved by Donald Trump to Jerusalem in violation of international law, will remain in the city, the United States will continue to provide a staggering $4 billion in military aid a year to Israel, part of the some $85 billion in US military aid provided to Israeli since its founding, the Jewish settlements on Palestinian land will expand and the apartheid Israeli state, now led by Prime Minister Naftali Bennett, who has called on Israelis to be willing to sacrifice their lives to annex the occupied West Bank into Israel, will treat the Israeli Arabs living inside its borders as second- and third-class citizens. Israel, in short, will methodically roll forward with what the Israeli human rights organization B’Tselem calls “a regime of Jewish supremacy,” a project, the Israeli historian Ilan Pappe writes, that has been the cornerstone of Israeli policy since the state was founded in 1948.

Professor Ilan Pappe teaches at the College of Social Sciences and International Studies at the University of Exeter in the United Kingdom, and is the director of the university’s European Center for Palestine Studies. He is the author of a dozen books, including ‘The Ethnic Cleansing of Palestine’, ‘The Modern Middle East’, ‘A History of Modern Palestine: One Land, Two Peoples’, ‘Britain and the Arab-Israeli Conflict’ and his latest, ‘The Biggest Prison on Earth: A History of the Occupied territories’.

On the show, Chris Hedges discusses with economist Richard Wolff how capitalism works under an autocracy or oligarchy, the only two political systems left in the United States of America.

The competing systems of power in the United States are divided between oligarchy and autocracy. There are no other alternatives. Neither are pleasant. Each has peculiar and distasteful characteristics. Each pays lip service to the fictions of democracy and constitutional rights. And each exacerbates the widening social and political divide, and the potential for violent conflict. The oligarchs from the establishment Republican Party, figures such as Liz Cheney, Mitt Romney, George and Jeb Bush and Bill Kristol, have joined forces with the oligarchs in the Democratic Party to defy the autocrats in the new Republican Party who have coalesced in cult-like fashion around Donald Trump or, if he does not run again for president, his inevitable Frankensteinian doppelganger. The alliance of Republican and Democratic oligarchs exposes the burlesque that characterized the old two-party system, where the ruling parties fought over what Sigmund Freud called the “narcissism of minor differences” but were united on all the major structural issues including massive defense spending, free-trade deals, tax cuts for the wealthy and corporations, the endless wars, government surveillance, the money-saturated election process, neoliberalism, austerity, deindustrialization, militarized police, and the world’s largest prison system. The liberal class, fearing autocracy, has thrown in its lot with the oligarchs, discrediting and rendering impotent the causes and issues it claims to champion. The bankruptcy of the liberal class is important, for it effectively turns liberal democratic values into the empty platitudes those who embrace autocracy condemn and despise.

Richard Wolff is a visiting professor in the graduate program in international affairs of the New School in New York City. He previously taught economics at Yale University, where he received his PhD, the City University of New York, the University of Massachusetts Amherst and the Sorbonne.

On the show, Chris Hedges speaks with the author Robert Eisenberg about the legacy of the Obama/Biden administration and how it led to the election of Donald Trump.

The election of Donald Trump to the presidency can be directly tied to the policies implemented by Barack Obama and Joe Biden during their eight years in office. Rather than confront Wall Street and the bankers who were responsible for the global financial crash of 2007 and 2008, they bailed them out. Rather than halt the military adventurism that led to the debacles in Iraq, Afghanistan, Syria, and Libya, they backed and expanded the wars, including the use of military drones. Rather than curb the destructive power of the fossil fuel industry, they presided over the largest increase in domestic oil production of any presidency and opened up more public and protected lands to drilling. Rather than address the gross injustices visited on the poor, mostly poor people of color, by militarized police and in the courts and the prison system, they allowed these injustices to flourish. Rather than make the inner workings of government transparent, they used the Espionage Act eight times to prosecute whistleblowers, including Edward Snowden, who exposed the wholesale government surveillance of the public. Most importantly, they did not stand up against global corporations that have carried out deindustrialization, imposed punishing programs of austerity and left cities across the United States in decay and poverty. The failure to address the suffering and anger of a betrayed public, even though the electorate gave them in 2008 a clear mandate to ameliorate this suffering, has been economically and politically catastrophic. As Biden embraces, once again, these corporate friendly policies, as he too betrays the mass of Americans, he seeds the ground for the return of another demagogue who may be Trump, or may be someone who this time is endowed with the focus and organizational skills, which Trump lacked, to snuff out what is left of our anemic democracy.

Robert Eisenberg’s new book is ‘The Center Did Not Hold: A Biden/Obama Balance Sheet’.