Terror at my workplace: The Islamist assault on Westminster 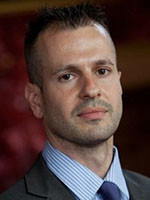 Marcus Papadopoulos
Dr Marcus Papadopoulos is the publisher and editior of Politics First, a non-partisan publication for the UK Parliament. He holds a PhD in Russian history and specialises in Russia and the rest of the former Soviet Union and the former Yugoslavia.
Get short URL
© Hannah McKay © Reuters
Follow RT on

The appalling Westminster terror attack was not unexpected. For some years now, MI5, the UK’s domestic security service, has set the terrorist threat level in Britain at “severe”, meaning that a terror attack in the country is “highly likely”.

Politicians, members of the Parliamentary Press Gallery (myself included) and other pass-holders at the Houses of Parliament have been aware for quite some time now that the Palace of Westminster (and the adjacent area, including Westminster Bridge, where the Islamist terror attack began) is a prime target for terrorists, and we have witnessed ever-increasing security measures introduced, including some in recent months.

Members of the public who have visited parliament would not have failed to notice the large numbers of heavily armed police officers guarding and patrolling the Parliamentary estate. I dare say that some of the public may have considered the heavy police presence to be slightly excessive. But yesterday’s terror attack clearly and brutally demonstrated why parliament has become one of the most guarded places in the UK.

The terrorist assault on the Houses of Parliament is not just attack on those of us who work there; rather, it is first and foremost an attack on UK democracy and every single person in Britain. And whilst we have to wait and see for what the police investigation uncovers, it is painfully evident that the attack on Westminster will not be the last. The UK parliament will continue, indefinitely, to be a magnet to terrorists.

MI5 and the police are tracking more than 3,000 homegrown potential terrorists in the UK on a daily basis. Prime Minister Theresa May said that the perpetrator of the Westminster attack was a British national who was known to MI5. Therefore, some serious questions will be asked by politicians and journalists, alike, as to how and why he was able to carry out the deadly attack, evading the authorities in doing so. It must be also mentioned, however, that a terrorist acting alone is the worst nightmare for any anti-terror unit. We still do not know if that was the case.

That brings me onto another point. The attack on Westminster demonstrates how a terrorist does not require guns, hand grenades or semtex to cause a catastrophic terror attack. All he or she requires is a car and/or a knife to inflict terrible casualties. Low-tech devices have now become a preference for terrorists in Britain and across the world. That is a terrifying reality for not just the British authorities, but for the entire British population. It is also a chilling reality for other countries in the world.

Turning to security precautions at the Palace of Westminster, as I said earlier these are rigorous, but I have often wondered whether the gates leading to New Palace Yard, opposite Parliament Square, which the Prime Minister and others use to drive into and out of parliament, should be open, despite there being armed police officers standing there. After all, the gates which lead to Downing Street, where the Prime Minister resides, are always closed, except, of course, when the Prime Minister, her Cabinet or guests are leaving or entering.

Given that the terrorist who perpetrated the Westminster attack actually ran through the open gates which lead into Old Palace Yard, killing a police officer in doing so, may result in new security precautions being implemented there.

As I write this article, the terror attack has resulted in the deaths of four people, while forty others are injured, some with “catastrophic” injuries. However, the human toll would undoubtedly have been even higher had the terrorist detonated an explosive belt, or if he had been armed with a gun. That is some consolation from this appalling tragedy.

I would like to end this article by praising the police at the Palace of Westminster for the security that they provide to people working and visiting there. These men and women put their lives on the line every minute of every day so that British democracy can function. The police officer who died confronting the terrorist paid the ultimate price for protecting UK democracy.

Let us all remember him, his family and, indeed, all of the other people who died and their families, too. History has shown that good always prevails over evil. I have no doubt that Islamist terrorism will be defeated in Britain, as it will be in Syria, Iraq and every other country in the world which is currently contending with this cancerous scourge.