From Thatcher to Farage, EU should have seen Brexit coming – now reform is key to avoid a mass Euro exodus

In his farewell to the EU Parliament upon Britain's release from Brexit purgatory, Nigel Farage said populism had proved popular – a message that should, but inevitably won't, be given serious thought by the EU powers that be.

While appearing resigned to the UK's decision to leave the bloc, its departure signals a massive blow to the EU – both financially and politically – from one its larger net contributors, trading partners and international heavyweights.

But will it learn the lesson that ignoring the legitimate concerns of others and encouraging the bullying and abuse of those holding alternative views will eventually drive a wedge between even the closest of allies?

Despite common perception, the UK's obstinacy is not a new phenomenon.

Back in 1990, Margaret Thatcher famously dug her heels in over European Commission president Jacques Delors's bid for ever closer union. She insisted that she had not rolled back the state in Britain only to have it reimposed by an unelected superstate in Brussels.

“No, no, no!” she stormed to a particularly rowdy House of Commons.

The Sun newspaper memorably captured national feeling around that time with its headline “Up Yours, Delors!” 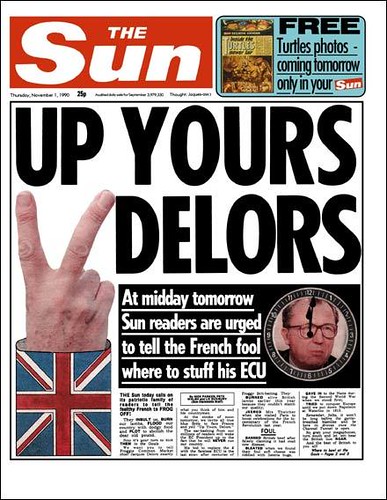 It was an early sign that all was not totally right between Britain and Europe, and the feeling of being told what to do by unelected Eurocrats proved a niggle ever since, particularly within the Conservative Party.

As Maggie found, things were complicated. She was dumped for being too anti-EU and replaced with John Major.

While Thatcher's stance eventually led to her downfall, too anti-EU for the Conservatives at the time, it opened a division in her party that has only just started to heal after nearly 30 years of toxic infighting, countless election ups and downs, and finally a commitment to leave the European Union.

Meanwhile Farage, though a political establishment pariah at home, has used the EU stage to make hit after telling hit on the bullying European bigwigs looking solely for ‘ever closer union', making himself some serious foes in the process.

The sneering goodbye from Mairead McGuinness, a former presenter of Irish reality TV show Celebrity Farm and now a parliamentary vice president, was typical of the general attitude towards Farage and his colleagues.

Also on rt.com Farewell Friday: EU won't miss the British MEPs who shamed their nation with their greed, corruption and brawling

“You're leaving,” she said, “and take your flags with you.” McGuinness is notoriously quick to turn off the microphone, while making a tart remark, for those speakers from whom she has heard quite enough.

To Farage, it was nothing. What does he care? But it was a rare public moment that saw a chill wind blow the curtain back just a touch, letting us see the contempt of those that run the EU towards the upstarts and ingrates who would dare question them.

Farage's greatest crime? He would not play the game. He continually drew attention to the European political establishment and its club mentality.

Insiders joke that the reason there are twin revolving doors at the entrance to the European Parliament is because when people exit by one, they simply walk back in through the other, in a never-ending game of playing favourites.

The only consistently dissenting voice to this type of cronyism came from Farage. His withering personality assessment of Van Rompuy as a “low-grade bank clerk with the charisma of a damp rag” as his target squirmed in his seat ranks as one of the great political put-downs of modern times, viewed by millions on YouTube.

The attention this brought the social media-savvy Brit did not go unnoticed by fellow disruptors. There are now significant Eurosceptic factions from other nations holding seats in the European Parliament.

There are Italians, Germans, French, Swedes, Finns, Croatians, and on the list goes. The MEPs from these countries have also seen that it is perfectly do-able to leave, and that is what should worry the EU.

Because unless it shows that it's listening to the voices from all corners of Europe that are unhappy with the cronyism and unaccountability, disillusioned with the economic doldrums, and worried about forced migration and cross-cultural concerns, then the EU will face further pressure from disgruntled nations prepared to follow Britain out the door.

It's already happened once and it takes a brave person to say it will never happen again. As Nigel Farage said, populism is, indeed, popular.

Crisis in Transnistria: Will the Ukraine conflict spread into other parts of Europe? FEATURE
How a century of political violence in Ukraine is linked to the atrocities of today FEATURE
'An act of genocide': A witness recalls the 2014 Odessa massacre FEATURE
Podcasts
All podcasts
CrossTalk: Europe at war?
0:00
25:10
Stuck in history? Steve Keen, Honorary Research Fellow at University College London
0:00
0:00