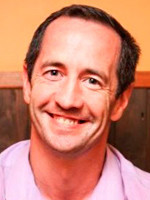 Alan Moore, a specialist in sports governance and nutrition, is based in Moscow and consults in and reports on sports. He has been involved in professional sports, including playing soccer and boxing, for over 25 years.

Alan Moore, a specialist in sports governance and nutrition, is based in Moscow and consults in and reports on sports. He has been involved in professional sports, including playing soccer and boxing, for over 25 years.

No matter what you do, there will always be someone who can do it better - or at least they’re going to say so. Some might genuinely believe they can do it better and they may be right. Those people, if they go about it the right way - open, transparent, honest, fair - deserve the utmost respect. Then there are the others. The dogs who want to lie in the manger just to be there. They are the ones who have one aim - power. The ones who derive power by perceived activity when all along they use the blackest of black arts to get what they want.

Travis Tygart, the CEO of the United States Anti-Doping Agency (USADA), leapt to fame on the back of dogged journalists, genuine and non-genuine whistleblowers, and being in the right place at the right time. A lawyer, he moved from the world of athlete management and looking after accounts like the United States Olympic Committee (USOC), USA Basketball, Swimming and Volleyball. A strange pick, then, to head up an anti-doping organization, or at least a safe pair of hands. Given the history of Performance Enhancing Drug (PED) abuse in American sports, he’d have an easy time of taking care of business, right?

USADA is mainly funded by the USOC and operates as a business. Contracting its services to sports bodies who deem they need regulation on PED use by their members. USADA, as a private organization, is not subject to any governmental oversight - despite receiving funds from the Office of National Drug Control Policy (ONDCP). So why is this private business looking to destroy the International Olympic Committee (IOC)?

While care must be taken with the most recent Fancy Bears leak as it can be taken in many ways, the overwhelming opinion is that there was a move by Travis Tygart and his business to call the shots in IOC processes. Ably supported by the subservient Canadian Centre for Ethics in Sport (CCES). Each time I hear this name, with the juxtaposition of ‘Canadian’ and ‘ethics,’ I smile. In November, the CCES announced they’d been hacked. How they must wish they’d taken advice to upgrade their firewalls.

Together USADA and CCES decided that they would be heard. Bypassing the World Anti-Doping Agency (WADA) and their own USOC and Canadian Olympic Committee (COC) they were moving against the IOC. By now all these acronyms will have your eyes spinning in your head, so forgive me. The power grab by Tygart and his cronies was typified in the letter sent by 14 National Anti-Doping Organisations (NADO) to the IOC on July 20th to have Russia banned from the Olympics.

Canada’s own Alanis Morissette could have been singing about this same hypocritical moment. At the time I remarked that the irony of those attaching their NADO’s to the letter bear examination. In hindsight we knew very little.

To paraphrase Alanis, wasn’t it ironic that AEPSAD, the Spanish anti-doping agency were a signatory given their lack of local activity for decades and continued avoidance of standing up to big sports business?

Wasn’t it ironic that Austria’s NADO were putting in their tuppence worth, given they embraced a doping criminal to their Olympic hearts and continue to turn a blind eye to his and his sponsor’s activities?

Wasn’t it ironic that the New Zealanders who did their usual PR bit to say they’re the cleanest, then their rugby players fail tests when they leave the country?

Wasn’t it ironic that while there were 14 NADO’s, the one tasked by WADA to clean up the Russian process, United Kingdom Anti-Doping Agency (UKAD) refused to get involved in Tygarts powerplay?

At the time I asked my contact in WADA about the situation. He found it laughable and that while it was aimed at the IOC, it was really a ploy to take control of WADA by Tygart and his cronies. In bullying the IOC into submission, they’d also carry out a coup in WADA. Power would be absolute, as would corruption.

The song and dance routine revealed by Fancy Bears must surely put to bed the notion that the main players were acting in the best interest of sport. We know that, as with every other country, there is an issue to be fixed with doping in Russia. With the need to be more beautiful and fit as quickly and as easily as possible, every gym across the globe has users of harmful, illegal substances. The use of PEDs in sports is not new and will never go away. It won’t go away as we don’t want it to. We want to see Usain streak over the finish line powered only by ‘chicken nuggets’. We want to see Serena and Masha grunt it out longer and with more power. We want to see the Leicester City underdog story come true. We don’t care what they’re on, we just want to be entertained. Which makes Tygart and his cabal even more unusual given the environment they’re coming from.

The biggest sports leagues in North America - National Hockey League, National Football League, Major League Baseball and National Basketball Association - refuse to be ruled by USADA or CCES. They respect the spirit of their respective NADOs but conduct their own testing and regulation.

George Mitchell’s 2007 report on PED abuse in baseball was suppose to be a watershed moment and chance to start afresh. The introduction of a ‘zero tolerance policy’ was assured by Major League Baseball and all would be well.

In 2013, 13 players - including superstar Alex Rodriguez - were suspended for doping in just one day, the league’s largest ever mass suspension. And in May, more players were about to be suspended for using the drug Turinabol which the bad doctor Rodchenkov was administering to Russian athletes. All this going on under the busy noses of USADA and CCES.

Read more
Wilder & Povetkin will fight in the court

However, we cannot be too hard on Travis and Paul Melia (CEO of CCES) for wanting to take the fight overseas. The prophet(s) is not accepted in their own country and these men, looking for profit, lined up a motley crew of other damaged entities to maximize their gain. Unloved, irrelevant and disrespected at home, the only way to get some real recognition and investment for their ability to catch athletes doping was to take power globally. The aborted legal case against the IOC shows just how low they were willing to go. Pinky and the Brain would struggle to keep up with them.

One wonders whether the USOC will soon re-assess their relationship with USADA and the COC with CCES. WADA and the IOC are largely reconciled, and are led by Europeans. They see the danger in solo runs by damaged entities like USADA and CCES, both to themselves and sport in general. Travis and Paul won’t get any richer by doing their job in North America, but grabbing control of the global levers, power will make them very, very wealthy. Not everybody wants to rule the world, but some do want to run it.