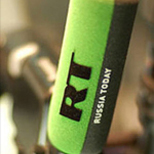 The irony of the European Parliament’s ‘Mythbusters’ project, which is directed at Russian media, is that if it were charged with highlighting made up, or exaggerated, news in EU member states (including, for now, the UK), it’d find more to report.

For the uninitiated, ‘Mythbusters’ is the name Brussels gives to the East StratCom Task Force, a group it set up to analyze news coverage in the Russian press, and RT in particular. It comprises a weekly spreadsheet pointing out factual mistakes; some of them open to debate. So you could argue that it fulfills something like the role played by MediaLens in Britain.

However, there is a difference. Whereas MediaLens is made up of two dedicated volunteers, East StratCom boasts a staff of eleven diplomats. It’s now poised to receive an upgrade to a €1 million annual budget, following an intensive lobbying campaign, driven by policy advisories funded by the very people with the most to gain from whipping up tension with Russia.

As mentioned above, if the EU extended the ‘Mythbusters’ remit to the British media, it’d surely do more to justify the largesse. Because, the comparatively impoverished MediaLens seems to be able to find more to highlight than StratСom East manages on the Russian front. While the UK outfit is able to call out the likes of BBC and the Guardian almost every other day, it doesn’t appear that the collective in Brussels has ever managed to find much of substance on RT. If they had managed to zero-in on something more than a difference of opinion or analysis, every mainstream news outlet on both sides of the Atlantic would have been shouting about it from the rooftops by now.

The MEP most prominent in driving the funding increase is Anna Fotyga. She’s a former Polish Foreign Minister, who was – ironically – previously described as a “lightweight" by the lobbyist and writer Edward Lucas. That was when he was ‘bigging up’ her rival Radoslaw Sikorski in the pages of The Economist. Sikorski happens to be married to Anne Applebaum, who along with Lucas is employed to lobby for CEPA, a Warsaw and Washington-based club funded by US arms makers. CEPA and East StratCom are now on the same side of the barricades, fighting Russian media in Europe.

Fotyga featured extensively in an ‘EU Observer’ piece this week that favored the ‘Mythbusters’ cause. The article offered some curious examples to defend its hypotheses that “Russian disinformation” is systematic and pre-planned.

“Some try to destabilize EU targets, such as a Russian story, earlier this year, that Turkish migrants had raped a girl in Germany - a false report that was personally endorsed by Russian Foreign Minister Sergey Lavrov.” The problem with this angle is that it’s misleading. A 13-year-old Russian-German girl in Berlin really did allege that she’d been raped by an immigrant. However, when questioned by trained specialists three days later “she immediately admitted that the story of the rape was not true,” as The Guardian reported at the time.

Thus, the constant regurgitation of this affair in pro-EU outlets is confusing, because it requires one to believe that only Russian news services sometimes report breaking news that turns out not to be fully accurate later. At the time, the girl’s mother even told Der Spiegel magazine that she was “doing very badly” and was having treatment in a psychiatric ward. Which begs the question, should the media have ignored the report altogether and was Der Spiegel guilty of disseminating “Russian propaganda” too or did the girl’s mother actually say that? It seems the latter is true.

This situation brings to mind some prominent British media coverage of high profile allegations in the UK in recent years, in which a number of celebrities were accused of improper sexual conduct with minors and newspapers went ahead and named the suspected abusers, often before police had even a chance to formally question them. This reached its nadir when BBC colluded with cops to live-broadcast a raid on the home of the singer Sir Cliff Richard.

The case against him was later dropped but the 76-year-old is suing the BBC for £1.5 million in a bid to seek redress. So, yes some news services jumped the gun on the allegations but it is something that happens at news outlets worldwide. At the end of the day, the story was based on allegations that did, take place, and such practice is a feature of the modern 24-hour news cycle throughout the world, rightly or wrongly.

Then there’s the issue of fake reportage about Russia itself. For example, earlier this month, when numerous organizations announced the Kremlin was “bringing back the KGB.” The list included US state broadcaster RFE/RL, Politico and The Daily Telegraph. In addition, the false narrative was extensively promoted on social media by oodles of EU officials and national government representatives.

However, when Russian Minister Sergey Ivanov clarified the yarn was nonsense and that no such plans existed, very, very few retracted. And the ‘Mythbusters’ aren’t rushing to pull them up on it either.

The EU Observer discusses how East StratCom watched this summer’s Dutch referendum on the EU-Ukraine association agreement and “documented its (the Kremlin’s) campaign to sway” the vote. This is more nonsense about Russia. Firstly, there was another EU ballot this summer, namely Brexit, where the President of the United States of America literally flew to London and told people to select the “remain” option. No Russian politician of any standing did anything similar in The Hague or Amsterdam. And had Russia been specifically targeting the Dutch population in order to swing its opinion on Ukraine, you'd at least expect some news production appealing specifically to Dutch people - perhaps actually in Dutch. Of which there was none.

And there are dozens more cases of European establishment scapegoating Russia for any “unacceptable” choices made by their own people. Oh, Democracy in action!

Then there’s Fotyga’s complaint that “the Kremlin spends, by its own admission, hundreds of millions of euro each year on its foreign and domestic media operations. The situation is a novelty for both politicians and high-ranking officials of the EU.” Just why is it a novelty? France, the UK and Germany do the exact same and they are all EU members at present.

There is Deutsche Welle and the BBC’s multiple news operations, which vastly outspend all Russian news media combined, as well as Euronews, France24, RFE/RL and dozens of state-funded national and local news channels in all the member states. Not to mention literally hundreds, if not thousands, of print and digital outlets, all more than equipped to promote the EU point of view in any language desired. So all the pearl clutching over Russia having an international news service operating in media-inexperienced and defenseless Europe is disingenuous at best.

Lastly, we are told that “East StratCom currently spends most of its time helping EU delegations in former Soviet countries to portray the EU in a positive light.” And that’s perfectly within their rights. But when Russia does similar, it is painted as nefarious interference and spun as Moscow exerting a heinous influence. That, like so much of EU behavior toward Russia these days is pure hypocrisy – disappointing, yes, but at this point, wholly expected.