'They’ll try to shut you down': Meeting Assange & the non-stop 'War on RT' 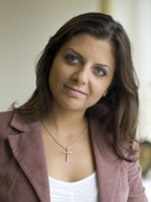 In 2005, at 25 years old, Margarita was named Editor-in-Chief of RT, the first Russian round-the-clock English-language news channel. Later on, after the launch of RT in Arabic (Rusiya Al-Yaum) and RT in Spanish, she became Editor-in-Chief of the whole multilingual television news network. Margarita Simonyan is also the first Vice-President of Russia’s National Association of TV and Radio Broadcasters (NAT).

In 2005, at 25 years old, Margarita was named Editor-in-Chief of RT, the first Russian round-the-clock English-language news channel. Later on, after the launch of RT in Arabic (Rusiya Al-Yaum) and RT in Spanish, she became Editor-in-Chief of the whole multilingual television news network. Margarita Simonyan is also the first Vice-President of Russia’s National Association of TV and Radio Broadcasters (NAT).

Last week, while in London, I went to see Julian Assange at the Ecuadorian embassy. We talked off the record of course, so I won’t divulge too much, but will post only what Julian insisted on making public. Before it’s too late.

Assange shared an enlightening story about a Kurdish TV station that had been shut down in Denmark. The story, like so many others – from diplomatic cables with undiplomatic comments to hundreds of uninvestigated war crimes in Iraq – came to his attention through a leaked cryptogram.

Once upon a time there was a Kurdish TV network in Denmark. It would just as happily 'be' anywhere else, but more fitting markets were off limits to the channel. The station, Roj TV, was aimed at Turkish Kurds, and that made the Turkish authorities very angry.

Turkish officials pressed their NATO ally Denmark to shut down the TV channel under some plausible pretext. But Denmark was reluctant, saying that multiple inspections didn’t find any propaganda of terrorism and there were no grounds to close it down. Such things weren’t done there; Denmark, after all, is a democracy.

'Democracy' did not prevail for long. Only until the point when the Prince of Denmark Prime Minister Rasmussen decided to become NATO’s secretary-general. But Turkey up and blocked his candidacy! Yup, over Kurdish TV that Denmark was being so stubborn about. So the big shots came together and agreed that the channel that was a beacon for an entire nation wasn’t a high price to pay for such an important position at such an important organization. And they tried to dig up some extremism, democracy be damned. They still couldn’t find any evidence of such, but coughed up some other unpleasantries. WikiLeaks has a wire in which US President Barack Obama himself urges his allies to think to resolve the Kurdish TV issue "creatively," so that the civilized nations are not accused of suppressing freedom of speech. And so they did.

“The same is in store for you,” Julian told me. Unfortunately, I have little doubt that he’s right. I had barely returned from London when the US House of Representatives overwhelmingly passed a resolution that, among other things, calls on US officials in Europe to “evaluate the political, economic, and cultural influence of Russia and Russian state-sponsored media and to coordinate with host governments on appropriate responses.”

In other words, the US would pressure Europe to kick us out of there. And that’s already happening. Over the last year we’ve been witnessing a number of less than pleasant trends.

1. Pressuring of our employees.

The executive editor of Radio Free Europe/Radio Liberty writes that “young journalists are already finding that a spell at RT is a handicap in getting jobs elsewhere.” And he is not alone in his opinion. Sometimes the stories are noisy (see Liz Wahl and TruthDig), at other times the pressure makes people resign quietly. Fortunately, often still, it stirs up outrage and desire to fight back and work even harder to defend your truth.

2. Hordes of Western media outlets attempting to discredit our work.

In the course of just a couple of weeks, the Guardian alone published half a dozen articles about RT that could all be summed up as ‘why the hell is Putin’s propaganda poisoning the unwitting minds of the great British land?’ I can’t recall a single well-known Western news outlet that hasn’t published a self-righteous sermon directed at RT. I doubt anyone else could either.

Christian Amanpour – arguably CNN’s most famous anchor / wife of former US Assistant Sec. State James Rubin – invited our correspondent Anissa Naouai “to talk about Ukraine”. Of course there was little talk about Ukraine itself; rather it was all about RT being horrible, disgusting propaganda trash.

Anissa is never one to be caught off-guard, and, an American herself, enjoyed verbal sparring with her compatriot. Unsurprisingly Mr. Rubin’s freedom-loving wife edited out Anissa’s most cogent and reasonable responses.

Our public financing makes us ‘government propaganda’; yet other state-funded media such as Deutsche Welle, France 24 and even Al Jazeera, are freely broadcasting in ‘free Europe’ without constant finger-wagging or accusatory rants in their direction written with such frequency and regurgitation of the same talking points as if a copy machine has gone mad.

What has by now become a trope in the so-called liberal press, Russian and foreign alike, about RT being ineffectual despite gobbling up huge amounts of cash. Most of the time, they grossly exaggerate the numbers (The Guardian went so far as to quote noted Russian media experts Pussy Riot, who more than tripled our budget overnight), and by the time we direct the journalists to the facts that are a matter of public record, it’s too little, too late: the word is out. And the printed word… these days, it gets away from you faster than a supersonic jet. Then these falsehoods go viral thanks to tireless efforts of opposition activists creating distracting and destructive noise around RT:‘look at them, taking billions from the people, God knows for what. Who needs them anyway?’

In recent past we’ve received nine warnings from Ofcom, the British media regulator. They are unhappy with everything about us. I’d understand it if they found explicit lies, factual errors, or any other specific fault with is. But they haven’t. And they don’t need to. All it takes is for them to think us biased, like when we had a report on Ukraine without interviewing a member of the interim government in Kiev, or when we reported on Libya without featuring NATO’s arguments.

My friend Stephen Cohen, a truly smart and educated American scholar and a preeminent expert on Russia (and whose friend Mikhail Gorbachev was cleaning a dried bream fish at his birthday party last year in front of my very eyes) told me that he hadn’t experienced this kind of pressure even during the Cold War. Whenever he speaks on RT, or just says something different from the choir of mainstream accusations in our direction, he is immediately attacked by other media. And we are seeing these kinds of external pressure attempts all the time.

Dear fellow Westminster bods, can we all agree not to appear on @RTTV_UK? There's no upside in helping the Kremlin spread its propaganda.

Does all of this affect us? Of course it does. I believe many RT employees have grown tired of constantly fighting with someone or other. It is exhausting to repeatedly answer questions like “how often does Putin call you”, or to give interviews just to have your words be taken out of context, distorted and used against RT.

As far as I am concerned, I hate fighting, be it a neighborly row or an international media confrontation. And no, fighting doesn’t excite me, it doesn’t motivate me, it doesn’t make me any stronger. All it does is get on my nerves and distract me from doing the real thing. Very often I want to step aside and just live my life: raising my two lovely little kids, writing happy blog posts about love and summertime, baking cakes. But then suddenly something happens to remind me why I’m doing this – like it did last week, as I was leaving the Ecuadorean embassy after talking to Julian Assange.

You aren’t allowed to carry your cellphone into the embassy, so I left mine with the guard. This guard, a curious and cheerful man, was sitting behind a desk next to the door. On my way out, he told me, flirtatiously, that he would only give me my phone back if I smiled at him. So I did. He handed me the phone and asked what I did – surely it’s fun to know who Assange’s visitors are.

“Do you watch RT? I am the channel’s editor-in-chief,” I answered.

I saw his face change in an instant. He rose to his feet and looked as if he were going to salute me: “Is that really so? Do you mean it? No way! That can’t be true!”

I gave him my card and he asked me to sign it, “to show this as proof to my family that I’ve spoken to RT’s chief”. He told me his whole family watched RT, because “otherwise we wouldn’t know what is going on in the world, just like all those dupes who watch nothing but the BBC.”

Why am I telling you all of this? So that you know that the efforts to tear us down are in vain. Never going to happen.