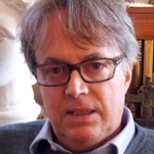 Claudio Gallo is a journalist, currently working as a culture editor at La Stampa, one of the main newspapers in Italy. He was foreign desk editor and London correspondent. Occasionally he writes for AsiaTimes and Enduring America. His main interest is Middle East politics. He was on the streets during the disputed Iranian elections of 2009 and during the start of the so-called Egyptian Spring in 2011. He writing focuses on the Shiite world: Syria, Lebanon, Iraq and Iran. He is banned from India because he supposedly wrote that the real country is very different from the officially publicized image. He likes to interview the last few thinkers who provide alternatives to prevailing ways of thinking.

The trip is from Crimea to Crimea, the name of the game is Propaganda. Ironically indeed, a war in Crimea in the mid-19th century (with the following Boer War) was the modern starting point of Western propaganda.

Now, with the current Crimean crisis, the circle is dialectically closing with a return to the same that is also very different. The difference is that today the deeply ideological scheme mainly used in the western media to explain not only Crimea, but the most dramatic crisis in the world, is Good vs Evil: the West is right because it represents the Light, the others are wrong because they are the Darkness. It is a moral dualistic scheme before being a political one.

To William H. Russell, the father of all war correspondents, the man who, writing from Crimea, invented the expression “Thin Red Line” and described the suicidal charge of the Light Brigade in Balaclava, dividing the world into Good and Evil had no sense. The old wars between empires were fought by ever-changing coalitions: today’s enemy might be tomorrow’s friend. Unfortunately, Russell’s candid belief that “no power on Earth can now establish a censorship in England, or suppress or pervert the truth. Publicity must be accepted by our captains, generals, and men-at-arms, as the necessary condition of any grand operation of war” was completely overturned by the governments that, from then on, wanted forever to be sure to decide how to tell the story. The technology of the media went to their rescue with the invention of cinema and then of television. Now they are telling us the story that propaganda was invented and was functional to the totalitarian states of the 20th century. The young Mussolini loved Gustave Le Bon’s “The Crowd,” one of the first books on crowd psychology, and Hitler gave a free hand to Goebbels, true. But as Noam Chomsky has demonstrated many times, propaganda was the very creation of democracies. In our Internet times we can observe this truth in front of us, so clearly that many are not able to see it.

The currently widespread scheme of Good vs Evil has come mainly from the Unites States after the last world war. The WWII was sometimes experienced in Europe in the spirit of a civil war, the bloodiest case of human fighting: Nazis vs Communists was its most ferocious variation. All is viewed within the famous Carl Schmitt’s polarity: friend or foe. Let’s push the fast forward: now we are in 1983. The US President Ronald Reagan, addressing the National Association of Evangelicals in Florida, defined the USSR as “The Empire of Evil.” The president-actor simply highlights what Hollywood has been silently suggesting for a long time with its movies. Go on. George H. Bush presents the first Gulf War (OK, the first was really Iraq-Iran...) in 1990 like a battle between Good and Evil. In 2003, his son George W. went beyond that and said to the stunned Palestinian leaders, in their first meeting, that he was told by God to invade Iraq and attack Osama bin Laden's HQ in Afghanistan as part of a divine mission to bring peace to the Middle East. Talking about Palestine, the US president was reported to have said: "I feel God's words coming to me: 'Go get the Palestinians their state and get the Israelis their security, and get peace in the Middle East.’”

Mission Unaccomplished, as we can sadly see now. George W. Bush was the one who employed the scheme with more creativity: he also compared the ideology of Islamic terrorists to Communism. (To create more confusion his neocon “maître à pensers” coined the term “Islamo-Fascism”).

Good vs Evil was the hidden leitmotif of Western military intervention in Libya, in 2011. Gaddafi, who with hard work and a lot of money had just reached the honorary Western status of “our bastard,” had to sink again in the realm of Evil. Unfortunately, the just liberated New Libya remained good for just a short time, pushing the usual realists of the day after to regret the devilish Colonel.

Good vs Evil apparently remains the background of the relationship between the White House and Iran, especially in the nuclear dialogue: nothing of what Tehran says is taken on face value, but is deconstructed in its supposedly hidden evil intentions. With different religious references (but always under the hat of monotheism) Iran has being doing the same from 1979.

The roots of this western attitude are mainly in the dominant American culture, deeply permeated with Biblical values. In a survey made by American Barometer in 2008, the 62.4 percent of American people thought that the world is a battle between Good and Evil. The God of the Bible is, in many aspects, a tribal divinity, as the general Namaan, healed from leprosy by the prophet Elisha, recognizes in 2 Kings 20: “There is no God but the God of Israel.” Christianity’s attempts to universalize the Biblical God resulted in the expansion of the borders of the tribe. In the Western imperialist expansion of 19th century, Namaan should have said: “There is no God but the God of Westerners.”

Like any ideology, you cannot find it overtly on the surface of the speeches, which are occupied mainly by technicality as who has already won this never done war, how many Ukrainians want to join Europe, how much the Russian gas is important for Europe, how many dollars is Obama sending to rebels. The scheme is usually hidden in the discourse except that sometimes it bursts out in a very emotional way.

One of the most topical ways in which the scheme strikes our addicted imagination is the Reductio ad Hitlerum as Leo Strauss (one of the neocons’ philosophers of reference) puts it first as a kind of fallacious rhetoric: the comparison with Hitler, practically the absolute Evil, a way to disqualify forever your opponent without discussion. Good examples are not lacking. In 2002, one year before to reveal to be “on a mission from God,” like John Belushi, George W. Bush, during a NATO summit in Prague, compared the challenge of Saddam Hussein to the Nazi invasion of Czechoslovakia in 1938, which led to World War II. More recently, on September 2013, the US secretary of State John Kerry said: “Assad has now joined Hitler and Hussein,” putting the Syrian President down to Hell.

Finally, not many days ago, Hillary Clinton compared Vladimir Putin’s actions in Ukraine to Adolf Hitler’s. “It’s what Hitler did back in the 30s,” she said. “All the Germans that were ... the ethnic Germans, the Germans by ancestry who were in places like Czechoslovakia and Romania and other places, Hitler kept saying they’re not being treated right.”

This is obviously not to suggest surreptitiously that the current ideological scheme should simply be reversed, that what is now the Evil should be seen as the Good. To try to cope with the reality from a more human point of view, probably, the best solution is to think that everyone should be considered evil, our friends not less than the others. If Clint Eastwood invaded the Caribbean island of Granada in 1993 to fight a revolutionary junta in the American courtyard, why Russia doesn’t have to protect Russians in Crimea and save its only access to the Mediterranean? Let’s come down to the Earth, where everyone follows one’s material interest and cultural obsessions: Ukrainians, Russians, Europeans and Americans. And, please, don’t wear the mask of God to talk of human matters.