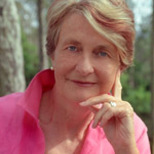 Born in Melbourne, Australia in 1938, Dr Caldicott received her medical degree from the University of Adelaide Medical School in 1961. She founded the Cystic Fibrosis Clinic at the Adelaide Children’s Hospital in 1975 and subsequently was an instructor in pediatrics at Harvard Medical School and on the staff of the Children’s Hospital Medical Center, Boston, Mass., until 1980 when she resigned to work full time on the prevention of nuclear war.

In 1971, Dr Caldicott played a major role in Australia’s opposition to French atmospheric nuclear testing in the Pacific; in 1975 she worked with the Australian trade unions to educate their members about the medical dangers of the nuclear fuel cycle, with particular reference to uranium mining. While living in the United States from 1977 to 1986, she co-founded the Physicians for Social Responsibility. She also founded the Women’s Action for Nuclear Disarmament(WAND) in the US in 1980.

Dr Caldicott has received many prizes and awards for her work, including the Lannan Foundation’s 2003 Prize for Cultural Freedom and 21 honorary doctoral degrees, and she was personally nominated for the Nobel Peace Prize by Linus Pauling – himself a Nobel Laureate. The Smithsonian has named Dr Caldicott as one of the most influential women of the 20th Century. She has written for numerous publications and has authored seven books. Dr. Caldicott’s two most recent books are the revised and updated If You Love This Planet (March 2009) and Loving This Planet, The New Press 2012.

Dr Caldicott currently divides her time between Australia and the US where she lectures widely. She founded the US-based Nuclear Policy Research Institute (NPRI), which evolved into Beyond Nuclear. Currently, Dr Caldicott is President of The Helen Caldicott Foundation/NuclearFreePlanet.org, an educational outreach project that informs people of the dangers of nuclear power and weapons.

As the escape of radiation at Fukushima seems virtually unstoppable, there are still steps that governments all over the world should take to prevent worst case consequences. One of them would be canceling the 2020 Olympics in Tokyo.

Scientific estimates predict that the radioactive plume travelling east across the Pacific will likely hit the shores of Oregon, Washington State and Canada early next year. California will probably be impacted later that year. Because the ongoing flow of water from the reactor site will be virtually impossible to stop, a radioactive plume will continue to migrate across the Pacific affecting Hawaii, North America, South America and eventually Australia for many decades.

We are only talking about ocean currents, however, fish swim thousands of miles and don’t necessarily follow the currents. As noted in Part I, big fish concentrate radiation most efficiently, and tuna have already been caught off the coast of California containing cesium from Fukushima. Seaweed also efficiently concentrates radioactive elements.

As I contemplate the future at Fukushima, it seems that the escape of radiation is virtually unstoppable. The levels of radiation in buildings 1, 2 and 3 are now so high that no human can enter or get close to the molten cores. It will therefore be impossible to remove these cores for hundreds of years if ever.

If one of these buildings collapses, the targeted flow of cooling water to the pools and cores would cease, the cores would become red hot and possibly ignite releasing massive amounts of radiation into the air and water and the fuel in the cooling pools could ignite. It is strange that neither the US government in particular nor the global community seem to be concerned about these imminent possibilities and exhibit no urge to avert catastrophe.

Similarly the global media is strangely disconnected with the ongoing crisis. Most importantly, the Japanese government until very recently has obstinately refused to invite and collaborate with foreign experts from nuclear engineering companies and/or governments.

This structure was severely damaged during the initial quake, its walls are bulging, and it sank 31 inches (79cm) into the ground. On the roof sits a cooling pool containing about 250 tons of hot fuel rods, most of which had just been removed from the reactor core days before the earthquake struck. This particular core did not melt because TEPCO was able maintain a continuous flow of cooling water, so the rods and their holding racks are still intact, but geometrically deformed due to the force of the hydrogen explosion.

The cooling pool contains 8,800 pounds of plutonium plus over 100 other highly radioactive isotopes. Instead of this core melting into a larval mass like the other three cores, it sits exposed to the air atop the shaky building. A large earthquake could disrupt the integrity of the building, causing it to collapse and taking the hot fuel rods with it. The cooling water would evaporate and the intrinsic heat of the radioactive rods would ignite a fire as the zirconium cladding reacted with air, releasing the radioactive equivalent of 14,000 Hiroshima-sized bombs and 10 times more cesium than Chernobyl.

Not only would the Northern Hemisphere become badly contaminated, but the Japanese government is seriously contemplating evacuating 35 million people from Tokyo should this happen. TEPCO has constructed a steel frame to strengthen the shaky building in order to place a massive crane on the roof so they can extract the hot rods by remote control. This operation is always performed by computer and a remote manually-controlled extraction has never been attempted before. If the rods are deformed, a rod could fracture releasing so much radiation that the workers would have to evacuate or, should they touch each other, a chain reaction could release huge amounts of radiation.

I defer to Arnie Gundersen, a nuclear engineer in whom I have great faith. He says that a 2-meter thick zeolite wall should be constructed some distance from the reactors on the mountainside, which would effectively absorb the cesium from the water surrounding the reactor cores so it could not get out and further pollute the pure water descending from the mountain. At the same time, channels must be constructed to pump and divert the unpolluted mountain water into the sea. Then the three molten cores and their associated buildings could be immersed in concrete as the Soviets did at Chernobyl, and the situation could possibly be neutralized for about 100 years. What our poor descendants will then decide to do with this radioactive rubbish dump is beyond my comprehension.

However, as one Japanese official said, “If we just buried them no one would look at another nuclear plant for years.” An interesting reaction, so it is perfectly obvious that despite the calamity, they still want to pursue the nuclear option.

North America and Canada the EPA should immediately start monitoring the fish routinely caught off the west coast and it must also, as a matter of urgency, establish many effective airborne monitors up and down the west coast and across the US continent, so that if there is another large release of radiation it will be effectively measured and the information rapidly passed on to the public. The same holds true for Canada.

The US and Canadian governments must forthwith ban imported food from Japan, unless each batch is monitored for contamination, and the food grown in the US and Canada needs to be effectively monitored pending another major accident. The US has allowed food measuring up to 1,200 Becquerels per kilo to be sold in the US from Japan, while the Japanese allowable concentration for food is only 100 Becquerels per kilo. What does the US government think it is doing purposely exposing people to radioactive food? This situation must be urgently amended.

Given these impending problems, how can Japanese Prime Minister Abe possibly say that Tokyo will be safe for the Olympics? He actually said that “there is absolutely no problem” and “the situation is under control.” Does he not understand that parts of Tokyo are already radioactively contaminated and that his government is dumping ashes from the incineration of thousands of tons of radioactive debris from the tsunami and earthquake into Tokyo Bay? Is this what the athletes will be swimming in?

What if there is another major release of radiation before the Olympics? Young fit people who have spent years in rigorous training must, under no circumstances be exposed to radioactive air, food or water. And how can Abe possibly consider spending all that money housing people in expensive accommodation and constructing stadiums etc. when his own people - 160,000 Fukushima refugees - live in shacks and millions still live in highly radioactive zones and when the Fukushima complex is out of control?