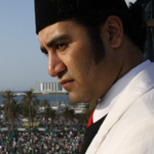 Mahdi D. Nazemroaya
Mahdi Darius Nazemroaya is a sociologist, award-winning author and geopolitical analyst. He is the author of The Globalization of NATO, a Research Associate at the Centre for Research on Globalization (CRG) and a member of the Scientific Committee of Geopolitica, a peer-reviewed journal of geopolitical science in Italy.
Get short URL
Reuters / Rooney Chen © Reuters
Follow RT on

As the US militarily pivots into the Asia-Pacific, the Chinese steadily march westward simply through trade-oriented construction and economic projects.

The Chinese have finished the construction of a major tunnel that is part of a mountain transport corridor from Turpan to Kurla that is linked to Pakistan. The corridor is part of the extension of the Karakoram Highway that is part of a project to re-integrate the westernmost portion of the People’s Republic of China with the areas of Eurasia to its west.

Beijing has been setting up its own transportation infrastructure and energy pipelines in Eurasia, and the infrastructure being built will be the engine of an economic renaissance that is unfolding. The Chinese now have a presence all around the old Silk Road and the ancient maritime trade routes in the Indian Ocean that sold spices and precious metals.

Despite US pressure and attempts to militarize and control the Indian Ocean’s shipping lanes, the Chinese have been busy setting up an infrastructure network stretching all the way to Gwadar, close to the Persian Gulf, in Pakistan and Hambantota in Sri Lanka from Chittagong in Bangladesh and Kyaukphyu in Myanmar.

While the US watches with displeasure from the sidelines, these Chinese projects are weaving the fabrics of Eurasian integration.

Washington’s secret wars against China in Xinjiang and Tibet

The US has tried and is continuing to try to weaken China. Washington’s attempts at weakening China have included exploiting the ethnic tensions and cleavages between the Han Chinese, which compose the majority of the Chinese population, and China’s non-Han citizens. This includes stoking tensions in East Turkestan between the Han and the predominantly-Muslim Turkic-speaking Uyghur indigenous population in the autonomous region of Xinjiang.

The US has also continuously pushed for protests and secession in Tibet. Although the Dalai Lama and his government-in-exile claim that the unrest was the result of discontent with Beijing, US Central Intelligence Agency (CIA) teams, US planning and CIA training were all involved in sparking and manipulating the Tibetan unrest that erupted in Lhasa on the eve of the 2008 Beijing Summer Olympics. The Han and predominately-Muslim Hui, an ethnic group comprised essentially of Hans that have mixed with Silk Road travelers and traders over the millennia, were targeted and killed during this wave of anti-Beijing unrest.

During the American Anthropological Association’s 110th Annual Meeting in 2011 (running from November 16 to November 20 in Montréal), one anthropologist even admitted that for research purposes that they were given privileged access to the CIA’s training program that ignited the 2008 unrest in Tibet.

The CIA even has training camps for Tibetan guerillas on American soil, away from public eyes in the Rocky Mountains.

Despite Washington’s rejections, there is also a body of literature that candidly discusses Washington’s covert Tibet operations. The Tibetan activist Jamyang Norbu wrote a chapter in a book published in 1994 and edited by Columbia University professor and Tibet specialist Robert Barnett, Resistance and Reform in Tibet, openly detailing the CIA’s role in Tibet against the Chinese government. ‘The Tibetan Resistance Movement and the Role of the CIA’ is the title of Norbu’s particular chapter. More recent literature includes the University Press of Kansas book by Kenneth Conboy and former CIA agent James Morrison that was published in 2002, ‘The CIA’s Secret War in Tibet’. These authors all openly reveal how the US has waged a covert war against China by encouraging Tibetan secession and controlling the heart of the Tibetan guerilla movement fighting against Beijing.

Washington has been pushing for trouble between China and the countries bordering China in the South China and East China Seas.

US officials dream of rebooting the Southeast Asian Treaty Organization (SEATO) too.

SEATO is the defunct NATO of East Asia that was supposed to expand in parallel with the Association of Southeast Asian Nations (ASEAN), just as NATO and the European Union have expanded hand-in-glove over in Europe on the western portion of Eurasia.

There is also the Asiatic segment of the global missile shield project that the Pentagon is building next to China’s heavily populated eastern borders. This is part of a Eurasian strategy of encirclement that targets both China and Russia alike.

This brings us to the so-called ‘Asian Pivot’ that Hillary Clinton announced in 2011 when she claimed that the US was pivoting towards the Asia-Pacific region and away from the Middle East and NATO-garrisoned Afghanistan.

Beijing did not buy any of it. China knows better. The US has no intentions of leaving the Middle East or the Pentagon’s military playland in Afghanistan.

Instead the Chinese are continuing with their project of slowly developing a trade-based infrastructure network that moves westward towards the Caspian and Mediterranean shores of the Middle East.

Foreign Policy, the magazine founded by Samuel Clash of Civilizations Huntington, was even given a taste of what is the obvious in China by the Stimson Center’s East Asia fellow Yun Sun in 2013: “As America pivots east, China marches in the other direction,” she explained to readers.

The US has not stopped skimming to halt the Chinese in their tracks. The Trans-Pacific Partnership (TPP) is yet another US scheme to do this. The aim of the TPP is to isolate the Chinese by imposing trade restrictions between Beijing and the rest of the Asia-Pacific region.

Beijing, however, has other plans.

China is going ahead with its projects, because it is not susceptible to Washington’s ongoing pressure and destabilization operations.

The shadow that the American Eagle has been casting from the sky over Eurasia is waning and shrinking as it steadily declines.

The Silk Road is being rebuilt in Eurasia by the Chinese Dragon and its friends. It is Marco Polo in reverse.

The Dragon and its friends, including the Russian Bear and the Iranian Lion, have different ideas about the management of their part of the world. Management in Eurasia they have declared will be local and not American. This is the basis for the blooming of an alphabetical hodgepodge of different regional organizations ranging from the Economic Cooperation Organization (ECO) and the Eurasian Union to the Shanghai Cooperation Organization (SCO).

This is merely the tip of the iceberg.

The Society for Worldwide Interbank Financial Telecommunication (SWIFT), which cut Iran off from the international banking system in 2012 under Uncle Sam’s orders, reported at the end of 2013 that China’s national currency supplanted the European Union’s euro as the second most-widely used global currency after the US dollar. 8.66 percent of global trade was taking place in the Chinese yuan.

This is just the beginning. The use of the yuan will increase in international transactions.

Despite US attempts to curb Beijing globally, Chinese influence in Africa and Latin America is increasing too.

The US divided Sudan, attacked the Libyan Arab Jamahiriya, and created US Africa Command (AFRICOM), while their French poodles begun to re-impose themselves militarily across Africa under Nicolas Sarkozy, as part of the attempt to drive the Chinese out of Africa. The results, however, have done little and Chinese influence has continued to grow in Africa.

Across Latin America there is talk about increasing trade with China. The Chinese are preparing to start building a mega canal in Nicaragua to meet the increased demands for trade from Latin America too. At the same time, the Bolivarian Alliance for the Peoples of Our America (ALBA) and the Community of Latin American and Caribbean States (CELAC) are also reorienting Latin America away from the US towards China and its Eurasian partners.

The Chinese presence is additionally felt in both the North Pole and South Pole. Beijing is eagerly waiting for the opening of an Arctic Silk Road or sorts and for exploration projects in Antarctica.

Beijing, in addition, a permanent observer at the Arctic Council and China has invested heavily in the research, Arctic development projects, and exploration of the countries bordering the North Pole. Beijing’s ultimate aim is to develop an Arctic transport network and access Arctic energy reserves.

The Pentagon sees China as the biggest threat to the United States. The threat, however, is not one of a military nature; it is economic.

Chinese soft power is outflanking US hard power. Unlike Washington and its Western European friends, Chinese capitalism is not sustained by military force. While Washington continues to wage war and siphon the wealth of vanquished nations, the Chinese just continue to do business across the world as they steadily continue their westward march in Eurasia towards the banks of the Caspian and Mediterranean. In other words, China works while America boxes.