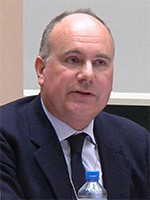 John Laughland, who has a doctorate in philosophy from the University of Oxford and who has taught at universities in Paris and Rome, is a historian and specialist in international affairs. He is mainly known for his work on the ideology of European integration and on international criminal law. He also writes extensively on post-Communist Europe and East-West relations. For 10 years until March 2018, he was director of studies at the Institute of Democracy and Cooperation in Paris. He has written widely in the British and European press, and has published eight books, many of which have been translated into different languages. The most recent of these is 'A History of Political Trials from Charles I to Charles Taylor’ (Oxford: Peter Lang, 2008 and 2017).