Dear President Trump: Iran is a nation of peace-loving people! 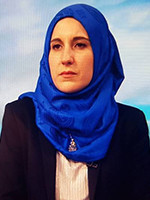 Catherine Shakdam
Catherine Shakdam is a political analyst, writer and commentator for the Middle East with a special focus on radical movements and Yemen. A regular pundit on RT and other networks her work has appeared in major publications: MintPress, the Foreign Policy Journal, Mehr News and many others.Director of Programs at the Shafaqna Institute for Middle Eastern Studies, Catherine is also the co-founder of Veritas Consulting. She is the author of Arabia’s Rising - Under The Banner Of The First Imam
Get short URL
© Atta Kenare © AFP
Follow RT on

According to Western media, the Iranian Islamic Republic is the source of all evil in the world. Its very existence is a threat to all God-fearing, peace-loving nations, most of all the United States - this shining beacon of tolerance.

Ever since Iran had the audacity to proclaim itself independent within the limit of its national borders - imagine the nerve! – thus began the demonization of a nation, a system of governance, and faith.

Over the past decades, the Islamic Republic has been accused of many grave sins, the majority of which were born in the depth of US propagandists’ hyperactive imagination. From Tehran’s purported hegemonic political ambitions to its pursuit of nuclear technology, Iran has existed in a vacuum - the one nation to be feared and abhorred, so that America could rise like a Sun in all political galaxies.

For those of you still unfamiliar with Iran’s political history, I would like to emphasize that up until 1979, Iran was a favorite ally and partner of the United States and Western capitals. Even Wahhabist Saudi Arabia could not help but smile gracefully at their Shia counterpart, all in the name of unity of course. In this long-gone golden political age, such matters as sectarianism, national sovereignty, and military ambitions were not issues to be debated from behind the barrel of a gun.

Back then, Hollywood had not yet emptied its bile onto Persia to reinvent a people under the heavy weight of misapprehension and ethnocentric bias. Then, Iran was still the proverbial land of milk and honey, where empires queued up to line their pockets, only to leave behind a people to wither away under suffocating oppression.

Who cared then for ‘Lady Democracy?’ In all fairness, none but those revolutionaries recognized the rule of the Shah as an affront that had to be remedied, answered to, and fought against.
We would do well to remember that Iran’s Islamic Republic was born on the back of Iranians. It was the manifestation of popular will and an unprecedented desire to implement a system of governance in line with Iranians’ belief system. Iran’s Governance of the Jurist is merely the expression of political Islam. Honestly, none but Iranians need to be comfortable with it.

Can someone open a window on America’s McCarthyist psychosis to finally comprehend that nations have a sovereign right to their own political future?

I find it fascinating how Western countries continue to claim democracy to be their holy grail all the while working for the enslavement of others in the name of capitalism. I find ironical America’s hypocrisy before Iran’s peace-brokering efforts in the Middle East when its leadership quite happily and in all impunity bomb foreign countries. Yemen anyone?

I traveled to Iran in late February and what I saw is not a nation in repression, but a people full of aspiration. I saw a civilization which, in its depth and humanity, put us all to shame with our ridiculous prejudices and over-inflated bias. Yes, even I have to admit to my Western-ingrained ethnocentrism.

Iran was not at all what I expected. If I were to define Iran, I would say Iran is free! Iran has freed itself from Western diktat and Western expectations the minute it chose to own its future.

Let me hammer this point, so there is no room for error: Iran IS NOT the Shia version of Saudi Arabia, and NO Iranians do not live in abject fear for their lives should they utter words of reproach at their officials. The Iran I witnessed was socio-politically empowered! The Iran I witnessed was progressive in that men and women could exist in the same space without any compromise.

Iranians, like their country, are old… their roots run deep, and so they do not let the clamor of America’s politicking distract them from their true purpose: to live free and dignified.

Iran is not burdened by sectarianism, it doesn’t live in hate or in rejection - those are the rantings of deluded Western politicians. And while you may argue some of the slogans that Tehran has thrown at the world, remember that such calls are directed at systems, not people and that they stand as condemnations against fascism not injunctions for slaughter.

Iran, a friend told me, is the one flag we can all trust will protect us when all else fails. An interesting statement considering Iran has offered its hand to those nations buried under the Black Flag Army.

Exceptionalism, whether it be political, social, religious or economic, is merely a euphemism for clinically tyrannical. Why should we all take our cues from the United States? Does might really equate to right these days? To which I would argue that Washington has already been kicked from its pedestal, and thus should learn that humility might come handy as it hits the ground. Aleppo (Syria) ladies and gentlemen was really America’s last song!

America’s ire with Iran is not ideological … at least not in the sense that most people understand it. Washington is troubled by Tehran, and the socio-political reflection it offers. I will go one step further and posit that the US Establishment does not understand the nature of Iran’s governance system.

As you well know, we tend to fear what we don’t understand and fear almost always lead to hatred. In the case of the United States, fear turned into a well-oiled propaganda machine.

In February 2017, political analyst Robert Inlakesh, responded to Washington’s anti-Iranian rhetoric by saying: “labeling Iran as the biggest problem and the biggest cause of terrorism in the world is complete lunacy."

It is because Iran’s new leadership evaporated America and Britain’s financial and military monopoly in the region that its government, political system, and ideology were vilified to the extent Tehran became the West’s very Eye of Sauron.

Let us not allow history to be re-written so that tyrants could claim holy ground on account they can put ink to paper. Enough already with the “notices” and “there’s a new president in town” tirades.

Let me put it to you differently: If US officials can bring themselves to mingle with sword-wielding, raging radical Wahhabist Royals in the name of “collaboration,” why can’t they hop across the Persian Gulf and sit through a cup of tea with Iranian dignitaries whose robes are not dripping with the blood of the innocent?

Ask yourself this: what made Iran’s Shah such a treasured friend and Iran’s Ayatollahs such dangerous enemies if not the latter’s desire to stand free in the face of imperialism?

Can we be rational here?

Under the brutal rule of the Shah, Iran was a grand favorite, home to dizzying natural resources and one pliable autocrat whose taste for gold was only thwarted by his political narcissism; Tehran was Western capitals’ very own Garden of Eden.

If America and its allies in the Greater Middle Eastern region - namely Saudi Arabia, had no qualms mingling with the Shah of Iran, a man whose taste for bloody repression would make any grand war criminal blush, all did recoil at the idea of a Republic on Asia’s doorstep. Why if freedom and democracy are the names of the game?

Are we all having a laugh? Pardon the informality of my speech, but one would have to have had drown oneself in the infamous Koolaid not to understand that Iran’s bad guy image comes right of out McCarthy's playbook.

Iran is no more bad than America is exceptional. Iran, like any other nation, is a work in progress.
There is a lesson in there somewhere!