‘Zero support for another war’: Americans march to prevent US-led intervention in Venezuela

The government of Nicolas Maduro is doing far more for the people of Venezuela than the US administration by providing free services for its population, anti-war activist Sara Flounders told RT, condemning the US-led intervention.

The activists, opposing the US-led intervention, organized some 150 demonstrations around the globe on Saturday to show that ordinary people are against any form of foreign interference. Rallies have been taking place across the US, Flounders told RT after attending a ‘No War on Venezuela’ rally in New York City. 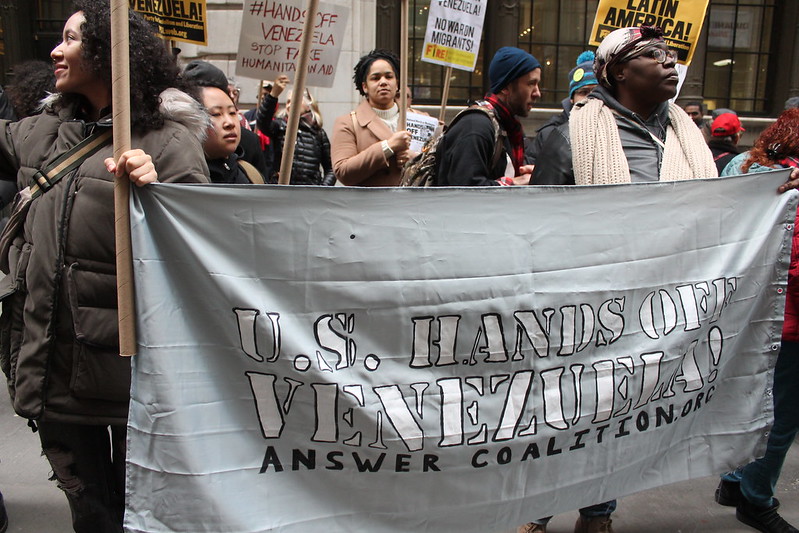 “In Venezuela today, there is more than six million families who are provided every single week a basic basket of essential supplies. It far exceeds any kind of food distribution program in the United States,” Flounders said. 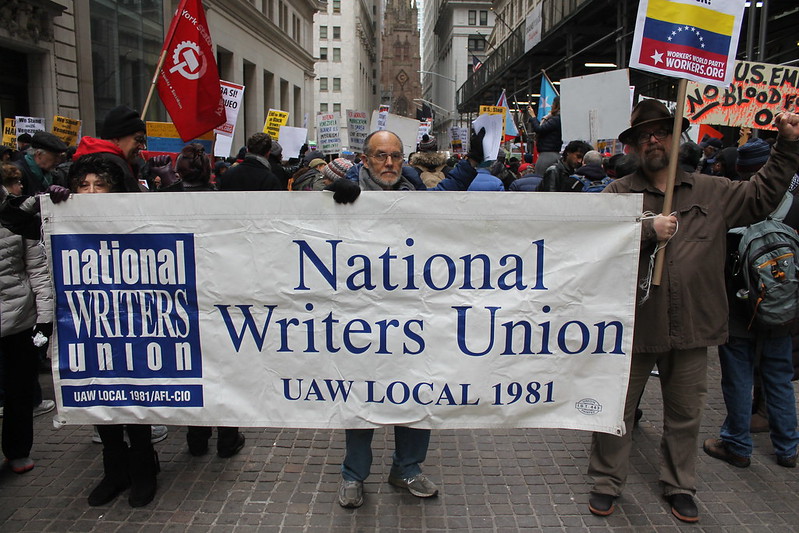 “Among the average working people, there is zero support for another war or for any war. US militarism is the greatest cause of poverty, inequality, disenfranchisement right here in the US,” the prominent author and anti-war activist explained, warning that if the US intervenes, it will “raise a firestorm” across Latin America.

While the American people oppose any sort of meddling in the affairs of other countries, however, the US media is operating under the “outrageous and arrogant assumption” that the government of Maduro is ready to fall. In reality, Flounders said, people in Venezuela mostly support Caracas’ socialist policies.

“The people of Venezuela and President Maduro are showing great, great determination and resistance. And that is what is inspiring people to act on their own regardless of what their governments are saying,” she said.

English rock musician and co-founder of Pink Floyd, Roger Waters, posted a video in support of Venezuela on Twitter. In a short clip, the longtime critic of the US’ interventionist foreign policy performed part of his song ‘We Shall Overcome.’ He had earlier criticized suggestions of hosting a Western-backed ‘humanitarian concert’ for Venezuela.

A video I made for the concert on the Venezuelan side of the border tonight. #handsoffvenezuelapic.twitter.com/hZUtxmswk5

Rallies were also held in Ottawa, Berlin, Rome, and Sydney, among other places. At the same time, the governments of these nations openly support the US-backed opposition in Venezuela. Protests were staged in Asian countries as well, including India and South Korea.

Today, in Ottawa, Canada, protesters marched from Justin Trudeau's office to the United States Embassy to demand that @JustinTrudeau and @realDonaldTrump keep their "greedy" hands off of #Venezuela's resources.#HandsOffVenezuela#VenezuelaCoup#Venezuela#cdnpoli#LimaGrouppic.twitter.com/wI51LTI5RW

President Nicolas Maduro thanked the Americans who took to the streets to oppose US intervention, posting a video of himself behind the wheel in Caracas, noting that it is “calm” and “quiet” in the Venezuelan capital.