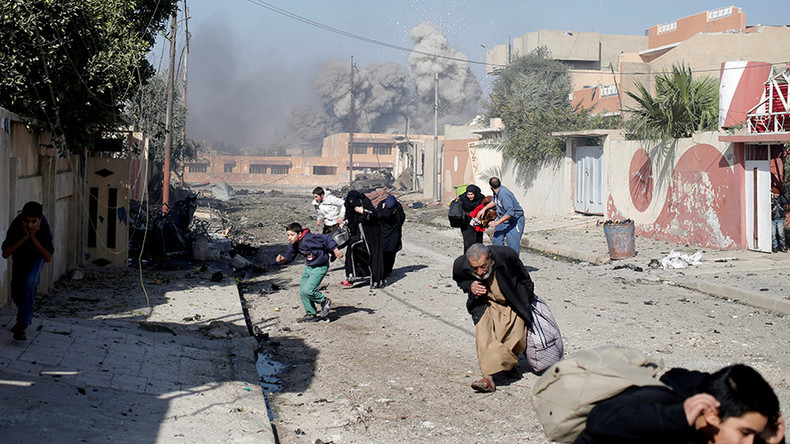 Iraq and the US-led coalition failed to create the conditions for an organized withdrawal of people from Mosul, which might have led to increased number of casualties during the operation against Islamic State, Russian Foreign Minister Sergey Lavrov has said.

“In case of Mosul, no conditions were created to allow civilians leave in an organized way. It was all chaotic, spontaneous. Obviously, when it happens in such an unexpected manner, it adds inconvenience and, probably, causes an increased number of victims,” Lavrov told the journalists after an informal OSCE ministerial meeting in Mauerbach, Austria on Tuesday.

On Monday, Iraqi Prime Minister Haider Abadi officially declared that Mosul, which has been Islamic State’s (IS, formerly ISIS/ISIL) de facto capital in Iraq for the last three years, has been fully liberated from the terrorists.

However, the eight-month-long operation, which the Iraqi forces carried out with the support of the US-led coalition’s aviation and Special Forces, has left most of the city in ruins, leading to thousands of civilian casualties and around a million people internally displaced.

“Of course, we are glad that the IS will suffer defeat, but, the price for victory against terrorism will be high in any case,” Lavrov said.

On Tuesday, Amnesty International issued a damning report, which slammed the US-led coalition in Mosul for misplaced and excessive airstrikes, urging it to publicly admit its failure to protect civilian lives.

Earlier, the UN’s humanitarian coordinator in Iraq, Lise Grande, said that over 8,000 civilians have been killed or wounded in Mosul, while 915,000 residents were forced to flee.

Lavrov has pointed out the apparent hypocrisy of the mainstream media coverage of Mosul, comparing it to the coverage of the liberation of Syria’s Aleppo during the Syrian government’s Russian-backed anti-terrorist operation. Even though special corridors were created to allow civilians and militants leave, the operation to liberation the eastern part of Aleppo was severely criticized.

“However, now the fact that many residents are returning to Aleppo escapes our Western colleagues. They prefer to turn a blind eye to it,” he added.

The Western media had also claimed that the Syrian-Russian humanitarian cargo contained “neither medicine nor medical equipment,” which was later refuted by evidence from the ground.

“After East Aleppo was liberated [in December 2016] the representatives of the World Health Organization (WHO) visited that part of the city and discovered huge supply of those drugs and everything that’s needed to take care of one’s health,” Russia’s top diplomat stressed.

Lavrov said that Moscow officially addressed the UN for explanations on why WHO as the body, which is responsible for humanitarian issues, was unaware of the real situation with medical supplies in East Aleppo and did nothing to stop the media misinformation.

There has so far been no reply from the UN so far, but Moscow “will be pushing for explanations,” Lavrov said.

The UN has meanwhile urged the liberators of Mosul to provide security to the civilian population of the city and assure their human rights, Farhan Haq, deputy spokesman for UN Secretary-General, told RT.

“On the one hand we’re certainly pleased that they [Islamic State] are no longer in control of the city. But, at the same time, we want to make sure that all of the forces that have helped liberate the city of Mosul in recent days, including the Iraqi security forces and any of their allies, will make sure that civilians are protected and that the rule of law is respected,” Haq said.

READ MORE: What we see in Raqqa is no attempt to protect civilians – Vanessa Beeley

The restoration of law in Mosul is of prime importance as “people of that city haven’t had any real way of having their rights respected” during years of IS rule, he stressed.

Despite the Iraqi PM announcing the full liberation of Mosul, Haq said that “there may still be fighting in different pockets of the city. We want to make sure that the civilian population is safe; that they have access to water; that their rights will be respected.”