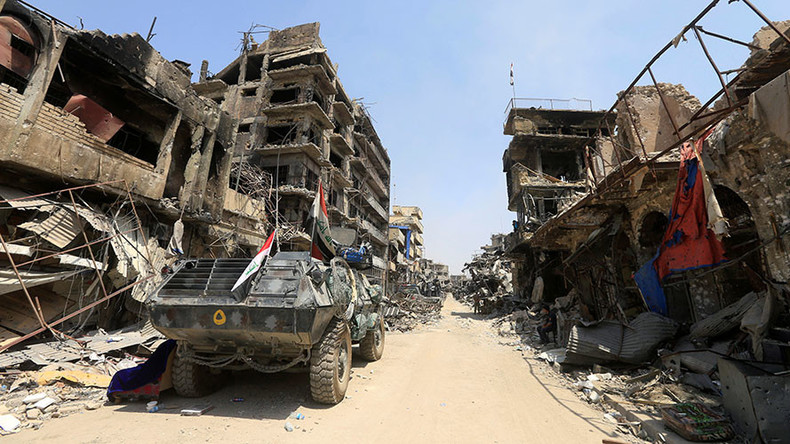 Iraqi PM congratulates military on ‘victory’ over ISIS in Mosul

Iraqi Prime Minister Haider al-Abadi has arrived in Mosul to congratulate the country’s security forces on their “great victory” in liberating the city from Islamic State terrorists after an eight-month-long operation.

“The commander in chief of the armed forces, Haider al-Abadi, arrived in the liberated city of Mosul and congratulated the heroic fighters and Iraqi people for the great victory,” the prime minister’s office said in a statement on Sunday.

State TV showed Abadi getting out of a military plane in a black Iraqi Special forces uniform, AP reported.

Some Iraqi troops were seen dancing in the streets and on top of their tanks, celebrating the liberation of the city from the jihadists.

However, Reuters reported that airstrikes and gunfire could still be heard in Mosul’s Old City at the time when Abadi made his announcement.

Despite the congratulations, the prime minister has yet to make a formal declaration announcing the full liberation of Mosul.

French President Emmanuel Macron took to Twitter on Sunday to congratulate Iraq, as well as members of the US-led coalition involved in the Mosul operation, on the victory

“Mosul liberated from ISIS: France pays homage to all those who, alongside our troops, contributed to this victory,” Macron wrote.

In late June, Abadi proclaimed that the “state of falsehood” created by Islamic State (IS, formerly ISIS/ISIL) had ended.

The announcement followed the recapture of the ruins of the historic al-Nuri Mosque in Mosul, which had been blown up by the terrorists.

At that time, Abadi promised to continue pursuing IS militants “to kill them and detain them, down to the last one.”

The operation to liberate Mosul, which had been Islamic State’s de-facto capital in Iraq since 2014, began eight months ago with the backing of US-led coalition warplanes and special forces.

Heavy urban fighting has led to the deaths of thousands of people and left most of the city in ruins and over a million residents displaced.

Over the course of the campaign, the US-led coalition forces have been criticized over Mosul bombing campaign.

On Thursday, the UN’s humanitarian coordinator in Iraq, Lise Grande, said that over 8,000 civilians have been killed or wounded in Mosul.

According to UN estimates, 915,000 Mosul residents have been displaced and the vast majority have not yet returned to their homes, she added.

Retaking Mosul from the terrorists means the end of the first phase of the operation, “but now the second phase commences, which is the rebuilding of the city itself for the people to be able to return,” Hala Jaber from The International Organization for Migration in Iraq told RT.

Rebuilding of the city will be long and expensive as “ISIS has destroyed a lot as did the airstrikes” during months of fighting, she said.

“There’s no magic wand. Nothing is going to happen in 24 hours…. But there will be serious attempts here, probably, to rebuild it (Mosul)” due to the city’s importance to Iraq, Jaber said.

“I don’t think that anybody just yet has an idea or an exact time schedule of how long it will take,” she added.

“We’ve seen much of the west of the city completely destroyed by ground fire and by airstrikes… thousands of civilians being wounded and killed in the fighting,” with the exact number of casualties currently unverifiable, she said.

Wille said the US-led coalition neglected a joint call by HRW and Amnesty International in June “to take more care in the way that it’s conducting airstrikes” and refrain from using heavier bombs.

“Unfortunately, the general feeling among the (US-led) coalition and the Iraqi government is that because the momentum to finish the operation has been on their side, they wanted to use all means to get it done as quickly as possible,” she explained.