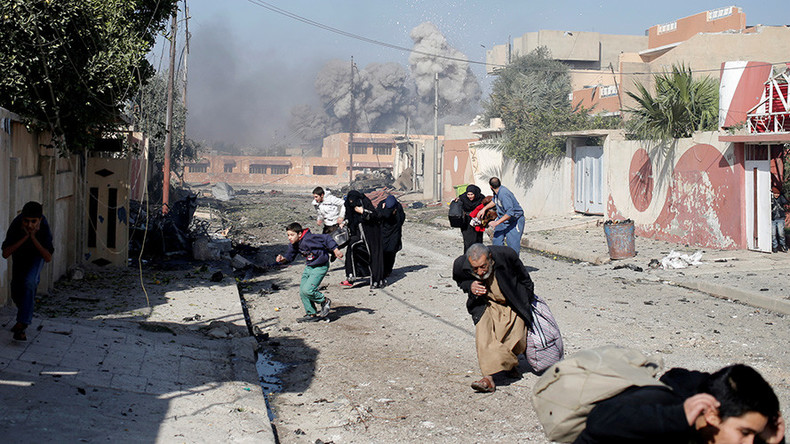 Six months have passed since the siege of Mosul was officially launched by the Iraqi army and its allies, including the US. Thousands of civilians have been killed in the battle, with hundreds of thousands being forced to flee the devastation.

Mosul fell into the hands of Islamic State (IS, formerly ISIS/ISIL) during the terrorist group’s lightning Iraq offensive in 2014 and became its de facto capital in Iraq.

The siege was officially launched on October 16, 2016, after months of preparing the operation and drawing forces towards the city.

The coalition forces outnumbered the terrorists by at least 10 times, had air support from the US and its allies.

By late January 2017, IS was pushed out from the entire eastern part of Mosul, but the fighting for the western part across the Tigris River continues.

Smoke rises from clashes during a battle with Islamic State militants in the Mithaq district of eastern Mosul, Iraq, January 3, 2017. © Thaier Al-Sudan © Reuters

Residents of the city were caught in the crossfire, being killed by IS snipers, Iraqi mortar shells and US airstrikes alike.

Displaced people who fled their homes wait for transfer to camps during the battle with Islamic State militants in Mosul, Iraq, November 30, 2016 © Alaa Al-Marjan © Reuters

More than 400,000 fled the city, overwhelming Iraq’s capacity to shelter and feed those displaced people.

The UN says 22 percent of residents of western Mosul had been displaced by end of March.

A displaced woman and child flee from Islamic State militants in the town of Bartella east of Mosul, December 24, 2016 © Ammar Awad © Reuters

According to Amnesty International, the US-led coalition killed hundreds of people, who were told by the Iraqi authorities not to leave the city despite the fighting.