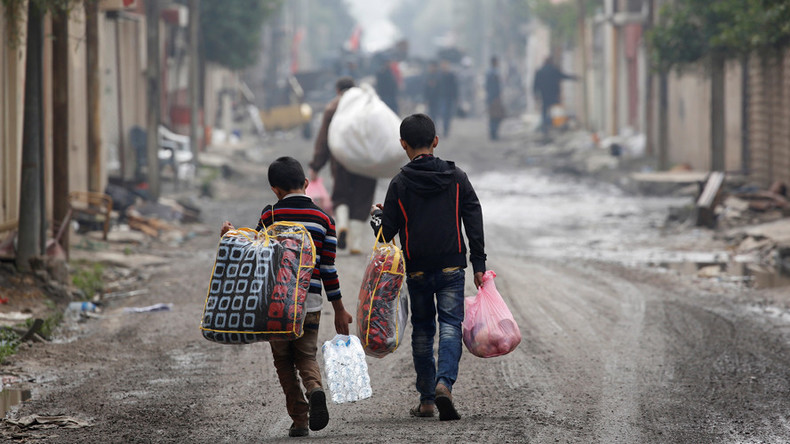 Nearly 45,000 people have fled the fighting between Iraqi government forces and Islamic State (IS, formerly ISIS/ISISL) militants in western Mosul over the past week, the United Nations Office for the Coordination of Humanitarian Affairs reported on Wednesday.

The latest development brings the number of people displaced from western Mosul up to around 135,000, the UN humanitarian aid office said, adding that “camp expansion is rapidly accelerating to ensure capacity keeps pace with demand.”

“Significant shortages of drinking water continue to be a major humanitarian concern in eastern Mosul city. Civilians in many neighborhoods of southwestern Mosul also have no access to the public network and are accessing untreated drinking water,” the office said.

Around 330,000 people had to leave Mosul since the military operation began in October, with only 72,000 returning home, according to OCHA.

On Tuesday, Iraqi forces made an attempt to evacuate Mosul’s Old City to clear the area of Islamic State militants, Defense Ministry spokesman Brigadier General Yahya Rasool said at a news conference in eastern Mosul, Reuters reported. However, the operation didn't succeed due to militant snipers.

“Our forces control around 60 percent of the west now,” Rasool said, adding that IS fighters were using civilians as human shields, hindering the offensive on the city that used to be the de facto capital of their self-proclaimed Islamic caliphate.

The UN refugee agency UNHCR fears that the fresh waves of displaced people fleeing western Mosul may overwhelm its capacity to accommodate them.

Since the siege intensified in February, an average of 5,000 people have been fleeing the city every day, the UN figures say.

It’s a common practice for terrorists to use civilians as human shields, but this hasn’t stopped the coalition from trying to regain control over the city.

Civilians are being caught in the crossfire between the terrorists and the US-led coalition, eyewitnesses told RT, blaming much of devastation inflicted on the city on the airstrikes.

As many as 600,000 civilians remain trapped in the western part of Mosul.

Fighting in heavily populated west Mosul was expected to turn into a tough challenge for Iraqi forces due to the city’s narrow alleyways and streets that don’t allow armored vehicles and tanks to go through, putting civilians under additional threat.