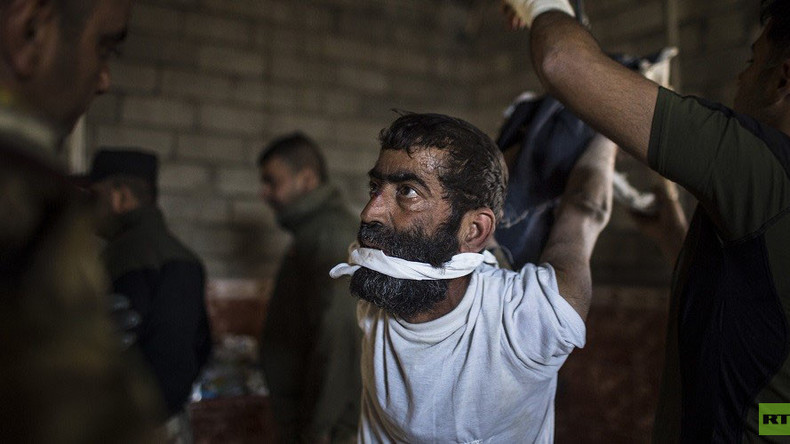 The Iraqi military, who were filmed torturing and abusing civilians, are “mainly supervised by US commanders,” a member of the Baghdad Security Committee, has said, telling RT that American military personnel have “some type of immunity” in such cases.

Saad Al-Muttalibi was responding after damning photos by freelance photographer Ali Arkady were released to the media. The pictures show Iraq’s elite Emergency Response Division (ERD) in Mosul torturing and abusing their captives suspected of having links with Islamic State (IS, also known as ISIS/ISIL).

“It is a war and a war is a horrible thing… It is a fact of war that innocent people will pay with their lives. Such action [torture and abuse] by army is definitely unsanctioned by the [Iraqi] government. We have a number of officers either facing trial or spending prison sentences here in Baghdad because of human right violations,” he said.

However, the problem is that military groups carrying out such violations are “mainly supervised by US commanders,” according to Al-Muttalibi.

“The rapid response units were trained by the Americans and are close to the US command,” he said. “They [US commanders] have some type of immunity that we can’t question them,” he added.

The American military has continued to work with the EDR despite the special forces unit being blacklisted in 2015 under the Leahy Act, which requires foreign military units to be banned from receiving US military aid if there is "credible information that such unit has committed a gross violation of human rights."

A US military spokesman, cited by ABC News, said that although an investigation into new evidence of ERD's alleged atrocities is warranted, there is no legal reason why the US cannot continue to work with the unit.

"Leahy vetting does not prevent the US from working with the ERD, as we do with other elements of the Iraqi Security Forces, to help ensure a coordinated effort among different elements of the ISF in the fight to defeat ISIS in Mosul," US Army Col. Joe Scrocca told ABC News.

In one photo series released by Akardy, the EDR soldiers are seen torturing a man in what is known as the strappado. It shows horrendous images where a detainee is hanged by his arms to the ceiling, blindfolded, with officers standing next to him and adding weights to his back to intensify the agony.

Al-Muttalibi told RT that the man in the picture “wasn’t murdered” and he “is alive.”

“The problem with that particular individual is that his son and his brother are members of ISIS. Unfortunately the officer in charge took matter into his own hands,” he said, adding, that the authorities are currently conducting an investigation into the matter.

Al-Muttalibi questioned if the pictures were taken in context, drawing an example of the “quality of the photos” and “the angles of light.”

“As if they [the photos] were orchestrated. The cameraman took a dramatic position to take the picture,” he suggested, adding that the officer who tortured the man and other troops are currently in custody.

Baghdad has taken full responsibility for the case, Al-Muttalibi said.

“Iraqi side is taking steps [to handle the situation], I can’t say the same about the Americans. We don’t know what they are doing.”

RT contacted the press service of General Combined Joint Task Force - Operation Inherent Resolve (CJTF–OIR) which said that the Coalition “does not condone or support any violation of the laws of armed conflict.”

“Any violation of the law of armed conflict would be unacceptable and should be investigated in a transparent manner and those deemed responsible held accountable in accordance with due process and Iraqi law,” the statement said.

According to OIR, the US government’s “support to the counter-ISIS campaign is conducted by, with, and through the central government of Iraq.”

“…At no time were US forces aware of or informed of these allegations until you brought them to our attention. At which point, we brought them to the attention of the government of Iraq and it is our understanding that they have already opened up an investigation into the allegations.”

Earlier, Human Rights Watch said the photos could possibly also cast a shadow on US and other members of the coalition in the Middle East.

“The US and other members of the anti-ISIS coalition risk complicity in Iraqi abuses given their participation in military operations with the country's security forces,” HRW statement said.

“What we recommend to the US and other international governments is to condition all military support on demonstrable and measurable steps to end abuses. Promises are not enough,” he said.