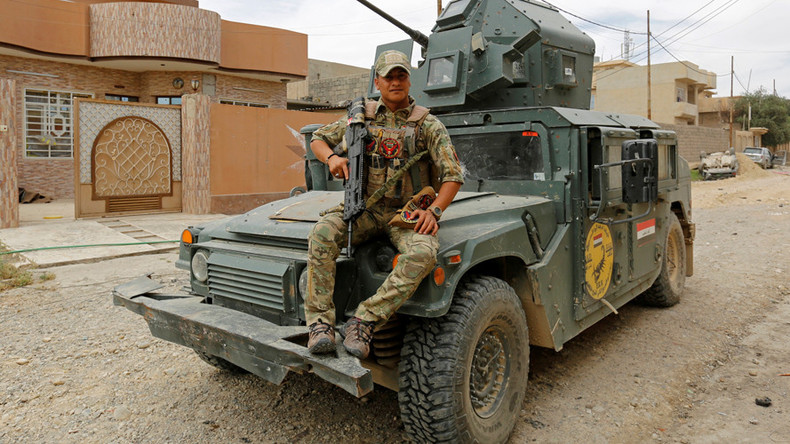 The Iraqi Interior Ministry said that it will investigate a report by Der Spiegel magazine, which accused the country’s elite US-backed military unit of murder, torture and rape of civilians during the operation against Islamic State terrorists in Mosul.

“The interior minister ordered investigators to conduct a clear and fair inquiry... (and) to take legal measures against those who are negligent if the investigation proves so,” the ministry said in a statement on Wednesday.

In the article, which was in stark contrast to Western reporting from Mosul, the photographer claimed that the ERD persecuted numerous civilians on “vague” suspicions of links with IS.

The piece included photos by Arkady of people hanging from the ceiling with their arms tied up behind their backs, as well as other torture scenes.

The victims were picked up during night raids, which included rape and looting, and taken to villages outside Mosul where there were no foreign journalists, he said.

Those detained were brutalized for days and then executed by ERD commanders and troops, the photographer said.

According to Arkady, the elite unit’s personnel received military training from US instructors.

He said that one ERD soldier also boasted that he learned a torture technique from the Americans, which included cutting the victim with a knife behind the ear.

The photographer wrote in Der Spiegel that “the Americans must have been aware of what has been happening” with the ERD unit.

In the article, he recalled that at least one of the night raids was monitored by US forces via a drone.

Arkady said he was on friendly terms with ERD commanders, whom he had photographed previously.

It was one of the reasons why the Iraqi troops had no problem with him taking pictures of the atrocities they committed, he said.

The ERD members even sent him their own pictures of torture and dead bodies, the freelancer said, adding that “they’d lost the concept of what’s good and what’s evil.”

Arkady said he initially planned to capture the heroism of the Iraqi troops during their fight against the terrorists, but was shocked with what he witnessed and couldn’t keep quiet about it.

The photographer and his family have now fled Iraq for an undisclosed country, fearing retaliation from ERD commanders.

The Emergency Response Division has refuted the Der Spiegel report, saying that it was based on “fabricated and unreal images.”

The US envoy to the anti-IS coalition, Brett McGurk, commented on Arkady’s apparent revelations on Twitter by saying that “Iraqi forces have bravely placed civilian protection as top priority throughout Mosul campaign, at great risk to their own personnel.”

However, he added that “individuals or units failing to uphold that standard do a disservice to their sacrifice and must be investigated and held accountable.”

Individuals or units failing to uphold that standard do a disservice to their sacrifice and must be investigated & held accountable. 2/2

The ERD and other elite Iraqi unites have largely contributed to the recapture of Mosul from the terrorists.

Iraqi troops, backed by US airstrikes and special forces, began the battle for Islamic State’s last stronghold in the country in October 2016.

On Wednesday, the Pentagon said that 90 percent of Mosul had been liberated, with the terrorist group only controlling a small area in the Old City.