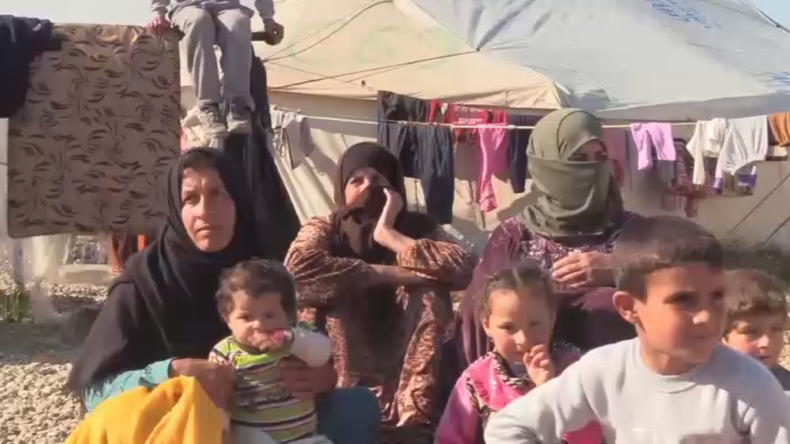 As US-backed Iraqi troops push deeper into the IS-held areas of Mosul, thousands of civilians are forced to flee amid the terrorist's increasingly gruesome attempts to hold them as human shields, inhabitants of an overflowing refugee camp told RT.

RT's Murad Gazdiev visited the Hasan Sham refugee camp, which is a relatively small facility housing some 10,000 people 25km east of Mosul. The camp was established only last November, but it's already nearing its capacity as newcomers arrive daily as result of the US-backed coalition's massive offensive to recapture western parts of Mosul from the IS (IS, formerly ISIS/ISIL) fighters.

Refugees told the RT crew that the ongoing battle shows the inhumanity from both sides: While the Islamic state holds civilians as human shields and engaging in other atrocities to prevent them from fleeing, the Iraqi army and its allies do little to help them escape.

“ISIS has started breaking peoples’ legs – men’s, women’s – to stop them from fleeing from the city,” a man who has just reached the camp, told RT. “When we ran from Mosul – there was a woman with a baby with us. The child fell into the river – and was swept away. No one stopped – everyone kept running.”

Those who managed to escape now fear for their relatives and friends who remain among hundreds of thousands still trapped in the city.

“If anyone tried to run away, ISIS would cut their head off… and if you managed to get away – they would burn your house down and target your relatives,” another man said. “My children begged me to get them out. They begged me not to die, so I could get them out.”

It's not only IS that people are running from. According to some accounts, Iraqi forces and the US-led coalition are conducting air and artillery strikes on jihadists regardless of the civilian presence in the area.

“Airstrikes didn’t hit civilians alone – but when ISIS fighters were among us – the jets would bomb us,” another refugee said.

“ISIS would kick people out of their home – and use it as a base for a day or two. Of course, the jets would find out – and when ISIS left and people went back to their homes – they would get bombed,” the refugee said.

“I saw with my own eyes three houses destroyed in an airstrike. ISIS fighters first went there and waited until they were detected and photographed – and ran away… then the jets bombed the where they were. 17 civilians were killed,” another man added.

The best way to survive in the besieged city is to avoid any contact with jihadists, as they grow increasingly savage as the military situation for them worsens.

“We avoided any contact with ISIS, and stayed in the house when they were near. They do whatever they want – and could kill you just for saying hello,” a refugee woman said.

Several thousand people have been killed and wounded in the battle for Mosul, ever since the Iraqi army alongside the US-backed coalition started the operation to retake the city from IS terrorists on October 17. The coalition managed to liberate part of the city east of the Tigris river after 100 days of intense fighting. A new phase of the battle begun on February 19, aimed at recapturing the western parts of the city still under IS control.

An estimated 750,000 people still remain trapped in the besieged city; and as the fighting approaches more densely populated districts, more and more civilians are desperately trying to flee the battle zone.

Some 45,000 people have fled the western part of Mosul “in the last nine days,” according to latest International Organization for Migration (IOM) estimates. Among these refugees are some 15,000 children, the United Nations Children’s Fund (UNICEF) reported on Friday.

More than 200,000 people have escaped from Mosul since October, while roughly a half of these refugees are children, according to UNICEF figures.

‘Huge concern’ as number of civilians displaced from #Mosul reaches 200,000, and are expected to increase https://t.co/FvCosTk2gI