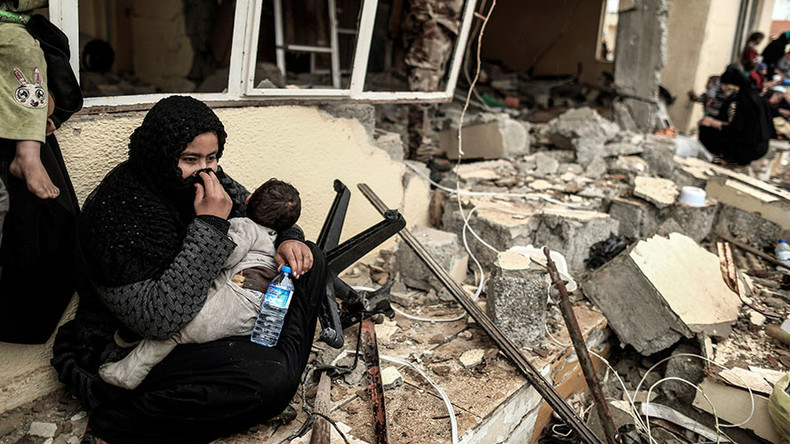 A number of Mosul residents and Islamic State militants were killed in an airstrike on a mosque in the western half of the city, where US-backed Iraqi forces continue their major ground offensive against the terrorist group, locals told Reuters.

The airstrike hit the Omar al-Aswad mosque located in the old city center of Mosul, three local residents told Reuters by phone. According to their accounts, houses nearby were damaged or collapsed as a result of the explosion.

The witnesses did not give a more precise estimate of the casualties as movements in the area were restricted by the militants, the news agency reported.

A spokesman for the US-led coalition said he had no information on a strike that targeted the mosque in question, according to the news agency. Iraqi officers, in turn, did not confirm the mosque attack, but said their troops were engaging Islamic State (IS, formerly ISIS/ISIL) “wherever they could.”

The report comes as Iraqi forces continue to push deeper into the western half of Mosul. Earlier in February, the troops captured the international airport of Iraq’s second-largest city following a brief, but intense, firefight.

Later, a neighborhood along the Tigris River and the foot of one of Mosul’s five bridges also fell to the Iraqis. Other bridges spanning the river and connecting western Mosul – still held by most motivated Islamist fighters – with the eastern part, were destroyed in coalition air raids last year.

The Iraqis and the coalition claim the liberation of Mosul is the matter of time, and if the western part of the city falls, the Islamists-controlled areas of Iraq will be reduced to a small string of land in the northwest, bordering Syria.

Despite military successes, there are serious concerns that hundreds of thousands of civilians in western Mosul will now be vulnerable to the perils of urban warfare. Whereas mines, barricades and trenches significantly complicated the Iraqis’ advance in eastern Mosul, the west of the city is believed to consist of more difficult, yet heavily-fortified, terrain.

Western Mosul is known for its narrow, curvy streets would mean the necessity to take house by house, apparently increasing risks for the civilian population.

At this point, the bloody street fighting in west Mosul already resulted in a dramatic surge in civilian population displacement. Some 12,700 people fled the area throughout the past two days alone, the UN Office for the Coordination of Humanitarian Affairs (OCHA) said on Wednesday. Earlier, other aid agencies warned humanitarian situation will only deteriorate as densely-populated areas of the western Mosul are gradually turning into a battlefield.

According to UN estimates, between 750,000 and 800,000 civilians are trapped in Mosul’s western half. Meanwhile, the United Nations says up to 400,000 people may have to leave their homes during the new offensive as food and fuel runs out in western Mosul.

In sharp contrast with the Syrian city of Aleppo, where residents and militants were offered escape routes out of the area, fleeing western Mosul is far more dangerous and complicated. Elisabeth Koek, advocacy and information adviser at the Norwegian Refugee Council in Iraq, told RT that civilians living in the old city are “at immediate risk.”

“We are prepared to host people in displacement camps,” Koek said, but added that the main issue is, “How do people get out?”

“We hear stories of people going through incredibly dangerous journeys through territories that could be potentially mined,” Koek said, providing an example of a family of more than 10 people that managed to cross the frontline.

“This [western] side has been cut off from food supplies, we’ve had a lot of reports of people not having food, water and, in addition it’s extremely cold, hospitals have been reporting that there is not enough medicine, infrastructure has been damaged, [including] roads and bridges,” she said.