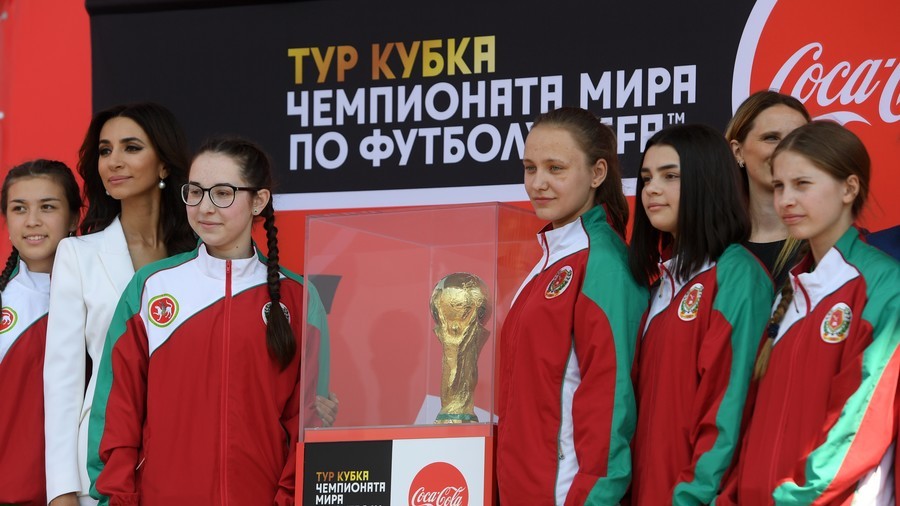 The first-ever ball girls at a World Cup opening game have undergone training on “how to quickly and properly throw footballs” in preparation for the big match on Thursday.

The team, a girls’ cadet school football team from the city of Agryz in Russia’s Republic of Tatarstan, will be responsible for distributing footballs during the World Cup 2018 opener between Russia and Saudi Arabia at Luzhniki Stadium.

After entering a nationwide contest to fulfil the role, traditionally known as a ‘ball boy’, the group were chosen from teams aged 13-16 by players of the Russian national squad.

Midfielder and prospective ball girl Yulia Shustova was on hand at the gruelling training session on Sunday to tell RT how the team practiced valuable skills such as “how to throw the footballs properly” in the role so they “don’t fly off anywhere.”

“I got into the team by playing basketball for our school team. We had a training session and after that the coach suggested to all the girls in the team to play football, to create a school football team,” Yulia, who admitted her grandfather is “super-proud” she will be attending the World Cup, said.

Traditionally reserved for boys, the role is to maintain the temp of the game by making sure that when the ball goes out of play it is returned quickly to the player so they can restart the game. High levels of fitness and concentration are required, and, of course, a strong interest in the beautiful game.

“The World Cup will be held in out country and will be a great honor for us, especially as there will be games in our capital: Kazan. For the Republic of Tatarstan it is also a great honour for our people,” the secondary school student added.

“We found out about the competition online. I was sitting on social media, news came out and I was looking at the advert and sent it to our team group chat. Our coach saw it and said let’s give it a go.

“Our coach gathered us for an announcement and hinted at we had won. But we didn’t really get it. Afterwards they called us to the office, told us to close our eyes. When we opened them there was a letter from Coca-Cola. Our eyes lit up and everyone started to cheer!”

The team have already taken part in the Kazan stage of the World Cup Trophy Tour in May, where the team had a chance to be photographed with the famous golden prize.

With just days left until the tournament curtain-raiser, the girls were fine-tuning their skills to ensure the balls are returned on time to maintain the pace of the most-anticipated game in the footballing calendar.

“In the training session today, we are learning how to throw the balls properly, which movements are needed so the ball doesn't fly off anywhere. We will also have our own training session that will be more focused on football.”

Kazan’s eponymous Kazan Arena is one of 12 host venues for the Russia 2018 tournament, hosting six games in total, including world champions Germany in the Group F match against South Korea on June 27, as well as a quarter-final.