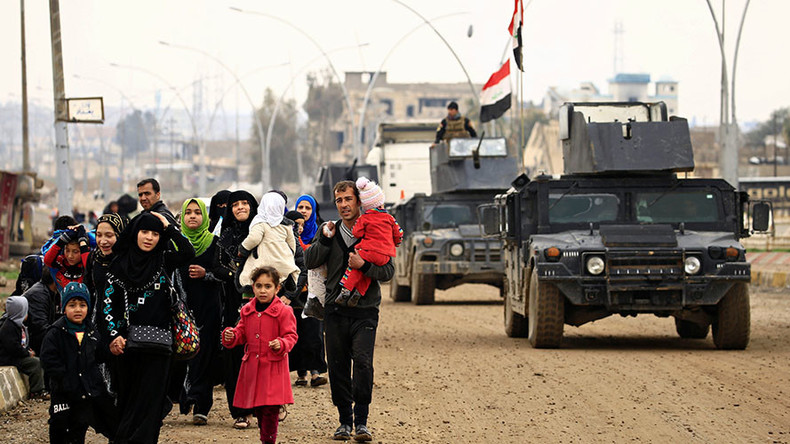 Iraqi troops are firing heavy artillery and rockets in west Mosul, which they earlier pledged to avoid. This is forcing a massive civilian exodus from the Iraqi city, a senior Iraq researcher at Human Rights Watch, Belkis Wille, told RT.

“We are seeing the Iraqi forces starting to use heavy artillery in west Mosul, something they didn't do in the east and they committed not to doing. We’re also seeing them firing inherently indiscriminate rockets... into civilian-populated neighborhoods,” Wille said.

“As long as that continues, we're going to continue to see people pouring out, as well as of course an increase in civilian casualties, because these people are also victims of abuses by ISIS [Islamic State or IS], so they are really caught in the crossfire and they need to get out,” Wille emphasized.

Yet even if people manage to escape, they are faced with blood-chilling conditions in what used to be refugee camps – but have become prisons in disguise, she said.

“When people flee the fighting, they end up in camps. These are camps that are meant to be regular camps for displaced people, but the Iraqi authorities put such stringent movement restrictions on them... they are essentially being held in an open-air prison.”

Those who are suspected of having links with IS, go to actual makeshift prisons near Mosul.

These are “essentially homes that have been turned into facilities where they are holding hundreds of men, all in tiny rooms, to the point where rooms are filled with a stench, incredibly high in temperature, no one can even lie down to sleep, because the rooms are so jam-packed.”

“Men have been held there for months. We've even seen deaths in custody,” Wille told RT.

Unfortunately, the official authorities' response to the situation doesn't give much hope, she added.

“We've been pushing the Iraqi authorities on this issue as well, and unfortunately, they simply say that it's up to local authorities to determine the security rules in any given area, and they are unwilling as well to come out and condemn the fact that these IDPs [internally displaced people] are being held and not allowed to move freely.”

The international community is largely silent as well, Wille added.

“We have yet to see a public statement either by the UN's humanitarian coordinator, or by UNHCR [the UN’s Refugee Agency], or by any donor countries, who are giving money to these camps, condemning the fact that these camps don't allow free movement, and are therefore open-air detention facilities.”