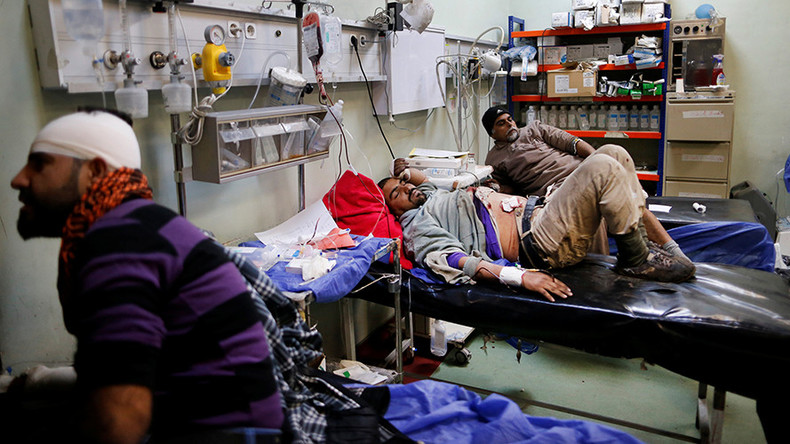 The UN-run World Health Organization is preparing an emergency response plan to treat Mosul residents injured in what appears to be the first chemical weapon attack in the assault on Islamic State’s Iraqi stronghold.

The World Health Organization (WHO) is working with local health authorities in the Iraqi city of Erbil to provide support in treating at least 12 people said to have respiratory symptoms and blistering. Four of them “are showing severe signs associated with exposure to a blister agent,” the agency said in a statement.

It is not immediately clear who launched the attack, but media reports indicate that the mortar shells came from western Mosul, which is still controlled by Islamic State (IS, formerly ISIS/ISIL) militants. The terrorist group is believed to be capable of manufacturing and using crude chemical weapons in both Iraq and Syria.

Since the outbreak of the battle of Mosul, the WHO has been developing the capacities to respond to the use of chemical weapons. According to the statement, the organization has trained over 120 clinicians and provided field decontamination equipment to local hospitals.

It also said the use of chemical weapons had deteriorated the humanitarian situation in western Mosul, “where innocent civilians are already facing unimaginable suffering as a result of the ongoing conflict.”

The chemical weapons attack was also confirmed and condemned by the International Committee of the Red Cross (ICRC).

The symptoms of the patients treated at Rozhawa hospital in Erbil included “blisters, redness in the eyes, irritation, vomiting, and coughing,” the ICRC said, adding that its medical teams dispatched to hospitals around Mosul have trained local staff on how to decontaminate and treat patients exposed to chemical agents.

“The ICRC condemns in the strongest possible terms the use of chemical weapons during fighting around the Iraqi city of Mosul,” the organization's statement said.

While the attack appears to be the first recorded use of chemical weapons in the battle for Mosul, there have been other cases in both Iraq and Syria. Earlier in January, Iraqi forces uncovered a mustard agent and missiles in a storage area formerly controlled by Islamic State near the historic Nineveh ruins, AP reported.

In September last year, the US military said IS militants fired a rocket containing mustard gas at US troops at an air base outside Mosul. Last August, the Russian Air Force destroyed an IS chemical weapons factory in the terrorist stronghold Raqqa in Syria.

The Iraqi forces’ offensive to recapture western Mosul began after the eastern half of the city, separated from the Islamic State-held west by the Tigris river, was liberated earlier in January, after nearly 100 days of intense fighting. Recently, the troops seized some important spots on the outskirts of western Mosul, making a slow advance into the area.

Western Mosul, with its narrow streets, is believed to be an extremely difficult area to capture. The densely populated western half is expected to see numerous civilian casualties due to fierce urban fighting, humanitarian organizations say.

According to UN estimates, between 750,000 and 800,000 civilians are trapped in Mosul’s western half. Meanwhile, the United Nations believes up to 400,000 people may have to leave their homes during the new offensive as food and fuel runs out.